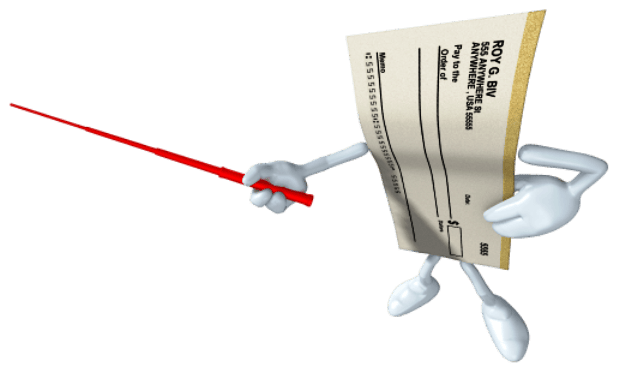 The Size of the Check Points the Way

In Washington State, the majority of workers’ compensation claims are “State Fund” claims managed by the Department of Labor and Industries (Department), with perhaps a third are comprised of “self-insured” claims managed by third-party administration companies under the oversight of the Department. In “State Fund” claims, managed by State employees, benefits are paid from monies received from both workers and employers – – Washington is the only state where workers and employers each pay half of the medical insurance premiums. When a dispute arises in a claim, the aggrieved party can file an appeal to the Board of Industrial Insurance Appeals (Board), another State agency. When an appeal is filed with the Board, the Department is represented by the Office of the Attorney General, yet another State agency.

Since the economic crisis hit Washington, as it has in every other state in the union, the Department of Labor and Industries has become very cautious concerning any expenditures.

Since the economic crisis hit Washington, as it has in every other state in the union, the Department of Labor and Industries has become very cautious concerning any expenditures. After all, audits have found mis-spent money — nothing worthy of headlines, but the media loves a good fraud story as much as they love a government waste story. Fraud investigations and video surveillance have increased dramatically in recent years at great expense to the Department with minimal economic benefit. The Department was recently found to have spent a significant sum on no-show fees to independent medical examination companies without recouping those charges from the claimants who failed to attend the examinations or, in some of the cases, without properly notifying those companies to avoid the charges when a cancellation was known to have occurred. The end result of the Department’s caution is that benefits clearly payable to a claimant are being delayed or denied simply based on the amount of money at stake.

Payments of minor amounts can be made by Department claims managers at their discretion, based on the records on file. Amounts over a few thousand dollars, however, trigger the need for supervisor review and approval before payment can be made. Consequently, we are working much harder to obtain payment administratively because the Department increasingly requires proof of entitlement to benefits “beyond a reasonable doubt” rather than simply based upon the opinion of a treating physician. One doctor’s opinion of a worker’s inability to work seems no longer enough to establish entitlement to benefits. We increasingly face roadblocks to payment in cases where the Department concocts an issue over whether the inability to work is related to the covered injury or condition or is instead due to some pre- or post-existing condition, even if the disabling condition is clearly shown to be related to the original injury or the treatment procedures for that injury. If payment or authorization for treatment for a condition is denied, we are forced to demand an order be issued. We then file an appeal, and off to litigation we go.

In the current economic climate simply the amount of money involved increasingly drives the decision-making process at every administrative level.

The paralegals and attorneys at our firm work diligently to document the benefits we are seeking and the medical support for the claims we are making. In some cases, the monetary benefit at issue is a fairly significant amount. In the current economic climate simply the amount of money involved increasingly drives the decision-making process at every administrative level. Denials are much more common when a significant sum is at stake, regardless of the validity of the claim. We encounter a “make them prove it” attitude, forcing cases to go through time-consuming and expensive litigation rather than being resolved through mediation discussions or agreement between the parties.

Yesterday, I received phone call apology after a denial order had been issued, expressing condolences but the hope that we will be able to prevail on appeal. Today, I was told by an Assistant Attorney General that she would likely not be able to get authority from her client – the Department — to accept our settlement offer due to the amount of money at issue – “the case will just have to be litigated.”

I can accept these denials when there is a genuine dispute over the facts, over whether a claimant is entitled to the benefits or not. I cannot accept it when the answer is simply “it’s too much money.” I would prefer the other side tell me why my argument lacks merit, tell me that I am wrong in my belief that the claimant is entitled to the benefits at issue, tell me where the hole in my case is – anything – but, please, don’t just say that it’s too much money. That is not a reason for a State Agency which, unlike an insurance company, has no inherent profit motive, to deny benefits.

Consider the relatively low values in workers’ compensation claims: 60 – 72% of pre-injury wages as wage-replacement compensation; surprisingly small awards for permanent impairment, with no consideration given to the impact on lifestyle or earnings ability. If there is a significant sum at stake, it is because of YEARS of delay, or years of benefits at issue, not because the claimant is lucky or greedy. The claimant didn’t win the lottery; he or she was simply injured on the job and denied benefits when they were most needed. That required hiring an attorney, and in many cases expended large sums of money in efforts to support their case. The significant sums often at issue in these cases do not make claimants RICH, nor do they make them WHOLE. They only provide the limited measure of compensation that our workers’ compensation system allows.

My message to our State: Don’t add insult to injury.

My message to our State: Don’t add insult to injury. Show claimants the respect they deserve and promptly make decisions in their claims based on the merits of their arguments and the evidence presented, without being influenced simply by the amount of the check that may be issued.