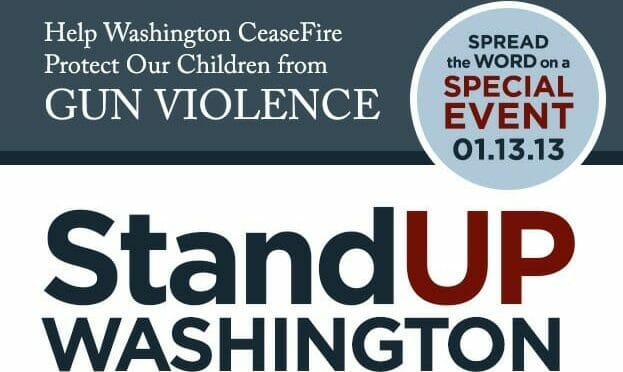 On December 14, 2012 the shooting carried out by Adam Lanza in Newtown, CT awakened the American people to issues of gun control, school safety and mental health care.  The nation mourned the loss of so many innocent lives and lauded the heroic actions of the teachers and staff at the school.

I was on vacation in downtown Manhattan the morning of the shooting.  Everywhere my family and I went we heard the same topic, over and over.  On the subway, we heard conversations lamenting that children are no longer safe, even at school.  In restaurants and throughout the Christmas markets in the parks – in any public gathering – the overheard conversations were on the same topic: how to prevent this from happening again.  Our own community in West Seattle held a candlelight vigil on Alki Beach, as many, many other communities across the nation did, to gather together and, by sharing the loss and fear, lessen the pain, together.

All of the adults killed at Sandy Hook Elementary were on the job; all were victims of gun violence in the workplace.

Another issue raised by this tragedy, one that has not been mentioned in the media, is workplace safety.  All of the adults killed at Sandy Hook Elementary were on the job; all were victims of gun violence in the workplace.  The families of the adult victims are now workers’ compensation claimants.  In Connecticut, death benefits are paid to surviving spouses at the rate of 75% of after-tax income, paid for life or until remarriage.  There is a $4,000.00 funeral allowance.  These benefits hardly compensate for the loss of a loved one.  An astounding 20% of all violent crime in the United States occurs in the workplace, injuring more than two million workers annually. Approximately 500 fatalities occur in the American workplace annually.  According to the Department of Labor, nearly 78% of all workplace homicides were caused by shootings. 1  The financial protection afforded by the workers’ compensation system does nothing to protect our safety and our lives from gun violence.  Only we, as a society, can take action to protect ourselves.  The change must begin with us, individually and collectively.

Washington CeaseFire is sponsoring a march and rally on Sunday, January 13, 2013 at 1:30 p.m. in the wake of the tragic shooting at Sandy Hook Elementary School in Newtown, Connecticut. Washington CeaseFire is turning Anger into Action, as supporters march from Westlake Park to Seattle Center Mural Amphitheater. The rally, called StandUp Washington, will include speakers, music and remembrance for those lost. Most importantly, there will be a call to action on this day before the opening of the 2013 Legislative session. Washington CeaseFire will join with thousands of other concerned citizens in demanding a ban to semi-automatic assault weapons, similar to those used in the Newton shooting.

Beth Flynn, Executive Director of Washington CeaseFire, says, “We want to send a clear message to our legislators that we want to ban semi-automatic assault weapons.”

Supporters are encouraged to bring their families and join civic, religious and education leaders in this show of support for sensible gun legislation and for the victims of all gun violence, from Newton to Seattle. Please use the hashtag #StandUpWA to spread the news on Twitter of the rally and march. A website has been set up at www.standupwa.org with further details.

1 www.elt.com – Terror and Violence in the Workplace