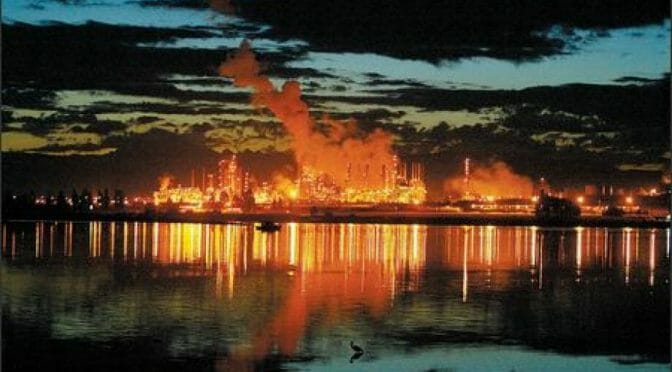 Shell Oil Products is facing $77,000 in fines from the state Department of Labor & Industries (L&I) for workplace health violations after an investigation into an uncontrolled toxic release last February.

L&I began the investigation at Shell’s Puget Sound Refinery in Anacortes after learning of an incident during which the refinery’s main flare released contaminants into the environment. The release prompted numerous odor complaints from the community nearby.

A refinery flare is a disposal system that burns off waste gases and vapors that cannot be used during production. It’s also a safety device that can help prevent fires or explosions during power outages or other emergencies. The flare must be decontaminated and shut down periodically for maintenance.

The investigation found that the company had skipped critical decontamination steps while shutting down the main flare for routine maintenance. Failing to implement safe work practices caused an uncontrolled release that exposed workers to toxic substances including mercaptans, hydrogen sulfide, hydrocarbons and pyrophoric iron.

The company was also cited in 2013 for skipping critical steps when shutting down the flare. In that case, there was an explosion that nearly injured several contractors and Shell employees.

For the recent incident, Shell Oil Products was cited for one willful violation and fined the maximum of $70,000 for knowingly and intentionally not following safe work practices for the control of hazards when shutting down the flare.

The company was also cited for one serious violation with a penalty of $7,000 for giving workers the incorrect procedure for shutting down the flare.

A willful violation can be issued when L&I has evidence of plain indifference, a substitution of judgment or an intentional disregard to a hazard or rule. A serious violation exists if there is a substantial probability that worker death or serious physical harm could result from a hazardous condition.

Over the last three years, L&I has responded to several complaints that resulted in 11 inspections at the refinery.

The employer has 15 working days to appeal the citation. Penalty money paid as a result of a citation is placed in the workers’ compensation supplemental pension fund, helping workers and families of those who have died on the job.