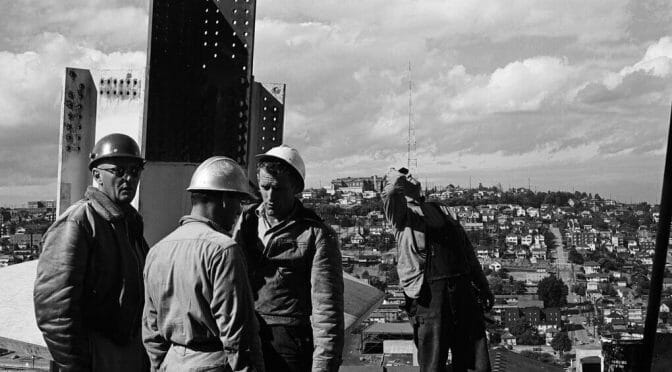 Despite the danger, there were no bad mishaps during the building of the Space Needle and it received a state award for no days lost to injury.

Gulacsik, who died in 2010, was a graphic artist and industrial photographer contracted by John Graham & Co., architects for the project. Week in and week out, Gulacsik would take the legendary Leica DRP 35-mm camera he owned and drive to where the Space Needle was being built.

He began taking his historic pictures in April 1961 as the giant 30-foot-deep hole for the foundation was being dug. He ended in January 1962 as the workers spray-painted “Galaxy Gold” on the roof, getting it ready for the Seattle World’s Fair that would open three months later.

Read Lacitis’s full article for a close look at the working conditions and workers’ stories of the building of the Space Needle.