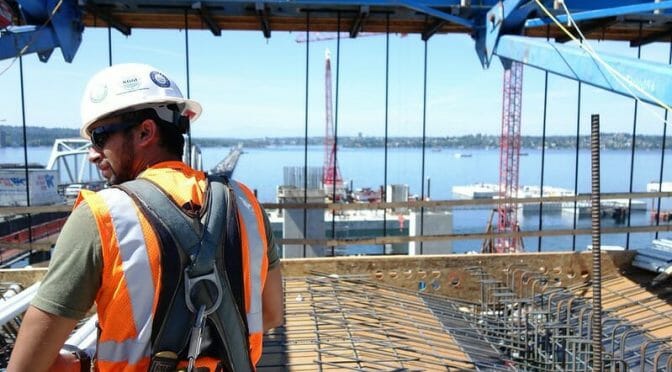 Fall protection lifelines cut by exposed edges have occurred in two separate accidents. The Washington State Department of Labor and Industries Division of Occupational Safety and Health (DOSH) recently issued an hazard alert directed to all employers and workers who rely on personal fall arrest systems. The following information was provided by DOSH.

This alert was developed by L&I’s Division of Occupational Safety and Health (DOSH) to alert employers, labor groups, and employees to potential hazards associated with work activities. This is not a rule and creates no new legal obligations. The information provided includes suggested guidance on how to avoid workplace hazards and describes relevant mandatory safety and health rules. DOSH recommends you also check the related rules for additional requirements.

In Washington State, two workers fell to their deaths due to their self-retracting lifelines (SRLs) being severed in separate fall incidents. The lifelines had been anchored horizontally (i.e., at a level below the harness D-ring.

One incident involved a steel-cable lifeline that was severed when it contacted the edge of formwork made of steel plates. The other incident occurred when a nylon webbing lifeline was severed after contacting sharp, abrasive edges along a beveled wall.

Evidence from investigations of each incident indicated damage to lifelines occurred during the fall, not before. In both cases, manufacturers of the lifelines warned about using SRLs around edges that could damage the lifeline or prevent the SRL from effectively arresting the fall. Although the incidents described involved SLRs, non-SLRs (e.g., lanyard and rope, webbing, or cable) have similar risk.

Employers are required to address this risk per WAC 296-155-24613(1)(e), “You must protect all safety lines and lanyards against being cut or abraded”.

How to prevent this from happening at your jobsite

Any open side or edge of a floor, roof, deck, platform, or formwork creates a condition in which a lifeline could contact an edge and be severed in the event of a fall. To protect workers who use lifelines:

When a fall could occur over an edge:

Share this alert with crews to reinforce awareness of this safety issue. 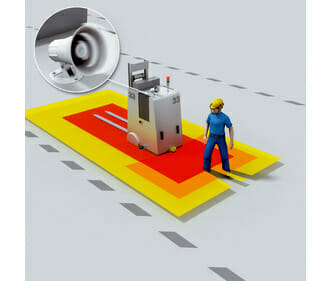 The Washington Fatality Assessment and Control Evaluation (FACE) Program* has published a new Fatality Narrative. The new narrative describes an incident where a warehouse worker was killed when he was crushed by the forks of a laser guided forklift. This Special Topic Fatality Narrative was published because the incident and the unique hazards associated with emerging automation are relevant to most industries. These reports describe work-related fatal incidents and list some requirements and recommendations that might have prevented the incident from occurring. We hope that they are used for formal or informal educational opportunities to help prevent similar incidents.

For your convenience, a slideshow version with more photos and details is also available.

*The FACE Program is partially funded by the National Institute for Occupational Safety and Health (NIOSH grant# 5 U60 OH008487-11) and the Safety and Health Assessment and Research for Prevention (SHARP) Program at the Washington State Department of Labor and Industries. The contents of the Fatality Narratives are solely the responsibility of the authors and do not necessarily represent the official views of NIOSH. 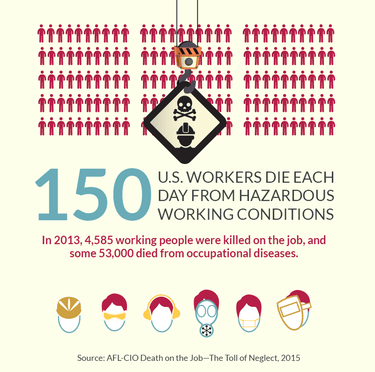 The AFL-CIO’s annual report about “the state of safety and health protections for America’s workers” has been written about in a previous year on this blog. The recently released 2015 version focuses in an in-depth manner on data from 2013 and includes around 200 pages of text, tables, details and information, along with a bit of jargon.

The report is extremely informative, and Nebraska and Iowa’s numbers will be examined in more detail in future blog posts, as these are states where the firm’s attorneys are licensed.

The report can also feel overwhelming once a person processes through the fact the each numeral on each chart represents the death of one person due to the workplace. There is also a ripple effect, as each person represented here had loved ones who both cared about and relied on that person. And for many involved, their lives changed drastically when their loved one died.

I appreciate the work, funding, thoughtfulness and effort put into compiling and analyzing the data, which includes a methodology section at the end of the report.

Here’s some sobering information from the summary.

“In 2013, 4,585 workers were killed on the job in the United States, and an estimated 50,000 died from occupational diseases, resulting in a loss of 150 workers each day from hazardous working conditions.

“Nearly 3.8 million work-related injuries and illnesses were reported, but many injuries are not reported. The true toll is likely two to three times greater, or 7.6 million to 11.4 million injuries each year.”

States with the highest fatality rate in the nation include a couple of relative neighbors: North Dakota and Wyoming. West Virginia, Alaska and New Mexico round out the top five. Lowest state fatality rates in 2013 were Hawaii, Washington, Connecticut and Massachusetts (tied) and New York and Rhode Island (tied).

Please contact an experienced workers’ compensation lawyer if you or a loved one is hurt on the job or has questions about job safety. 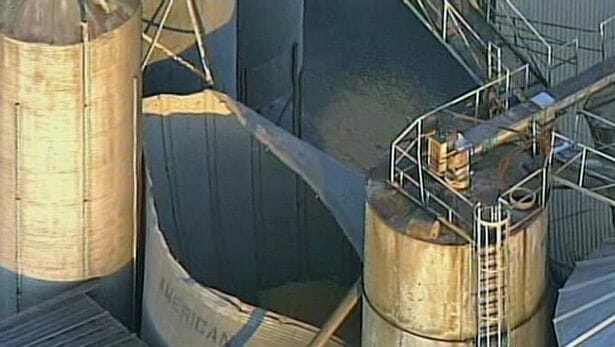 The Department of Labor & Industries (L&I) issued a press release on June 4th stating that it has cited Wilcox Farms Feedmill, Inc., of Roy for safety violations related to a fatal silo collapse last December. One worker died after he was engulfed in more than 400 tons of corn that spilled out of the silo.

Wilcox Farms issued a press release on February 12, 2014 describing the incident, the emergency response to it and how competitor farms came to the business’s rescue to provide feed for the chickens in the days after the accident.

“As an employer, especially a family business, it’s the worst thing you could ever imagine happening,” said Andy Wilcox. “The fact that we weren’t able to find Steve for two days was really tough.”

Wilcox has been cited for one “willful” and two “serious” safety violations with total penalties of $67,200. The state investigation found shortcomings in how the company maintained and managed the silo, and inadequate employee training.

A serious violation exists in a workplace if there is a substantial probability that worker death or serious physical harm could result from a hazardous condition. A willful violation can be issued when L&I has evidence of plain indifference, a substitution of judgment or an intentional disregard to a hazard or rule.

The day the 60-foot tall silo collapsed, two employees were working on feedmill operations, which included discharging corn using an auger in the silo. The unloading auger was not working that day, so they opened a side discharge door to allow corn to flow onto the outer portion of the auger. During that process, the silo collapsed and 400-500 tons of corn spilled out, engulfing one worker who was unable to escape.

“Worker fatalities are tragic and preventable,” said Anne Soiza, assistant director of L&I’s Division of Occupational Safety and Health. “Our state requires all employers to provide safe and healthy workplaces. We fully expect Wilcox will correct the hazards and practices that haven’t been fixed already to ensure their employees are as safe as can be.”

Wilcox Farms has 15 working days to appeal the citation.

As part of the investigation, L&I hired an engineer to assess the structural integrity of the silo.

The investigation found four instances where Wilcox was not following proper silo operation and maintenance procedures that may have contributed to the collapse. For example, if corn is added or discharged improperly or the silo is overfilled, tons of grain could build up at an uneven rate and then suddenly shift and create instability. The four instances were:

L&I concluded that this was a willful violation with a proposed penalty of $56,000.

The investigation also found two serious violations with proposed penalties of $5,600 each:

Wilcox Farms has 15 working days to appeal the citation. For a copy of the citation, please contact L&I Public Affairs at 360-902-5673.

Penalty money paid as a result of a citation is placed in the workers’ compensation supplemental pension fund, helping workers and families of those who have died on the job.