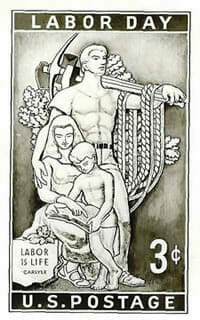 Detailed illustration of a 3-cent stamp issued to commemorate Labor Day in 1956. The image comes from a mosaic in the lobby of the AFL-CIO building in Washington, D.C.

The US Department of Labor – which is celebrating its centennial this year – has provided a history of Labor Day, including the inception of the holiday and the traditions that surround it, excerpted below.

…a day to honor those “who from rude nature have delved and carved all the grandeur we behold.”

The form that the observance and celebration of Labor Day should take was outlined in the first proposal of the holiday — a street parade to exhibit to the public “the strength and esprit de corps of the trade and labor organizations” of the community, followed by a festival for the recreation and amusement of the workers and their families. This became the pattern for the celebrations of Labor Day. Speeches by prominent men and women were introduced later, as more emphasis was placed upon the economic and civic significance of the holiday. Still later, by a resolution of the American Federation of Labor convention of 1909, the Sunday preceding Labor Day was adopted as Labor Sunday and dedicated to the spiritual and educational aspects of the labor movement.

The character of the Labor Day celebration has undergone a change in recent years, especially in large industrial centers where mass displays and huge parades have proved a problem. This change, however, is more a shift in emphasis and medium of expression. Labor Day addresses by leading union officials, industrialists, educators, clerics and government officials are given wide coverage in newspapers, radio, and television.

The vital force of labor added materially to the highest standard of living and the greatest production the world has ever known and has brought us closer to the realization of our traditional ideals of economic and political democracy. It is appropriate, therefore, that the nation pay tribute on Labor Day to the creator of so much of the nation’s strength, freedom, and leadership — the American worker.

Opportunity. Then and now, it’s about opportunity.

Labor Secretary Tom Perez blogged about the interwoven history of the civil rights movement and the labor movement, their common goals, and the needs we still face today.  Secretary Perez said:

“…But again, there is still so much more to do … in skills training and education, workplace safety and health, retirement security and job creation. And in particular, we must do more to ensure an honest day’s pay for an honest day’s work.

People who work full-time in America should not have to live in poverty – simple as that. Too many jobs don’t pay enough to get by, let alone get ahead. Too many people are finding the rungs on the ladder of opportunity further and further apart. Workers around the country are bravely raising their collective voice and taking action to demand fair wages. We need to hear these voices. They are acting in the proud tradition of the marchers 50 years ago who took action for justice and dignity.”

We couldn’t agree more. So, as we head out to our family barbeques or other Labor Day activities, we wish to pay tribute to those individual threads – the American Workers – that together create the fabric of our nation.