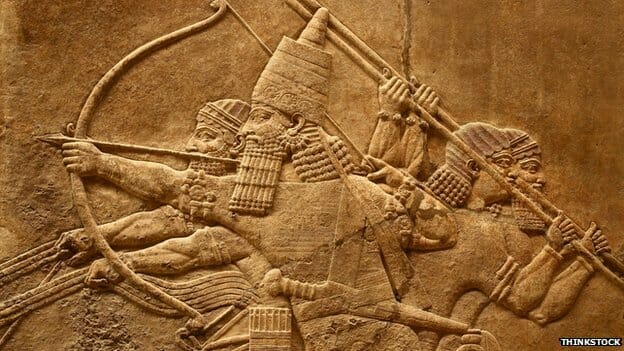 Evidence of post-traumatic stress disorder can be traced back to 1300BC – much earlier than previously thought – say researchers.

The team at Anglia Ruskin University analysed translations from ancient Iraq or Mesopotamia.

Accounts of soldiers being visited by “ghosts they faced in battle” fitted with a modern diagnosis of PTSD.

The condition was likely to be as old as human civilisation, the researchers concluded.

Prof Jamie Hacker Hughes, a former consultant clinical psychologist for the Ministry of Defence, said the first description of PTSD was often accredited to the Greek historian Herodotus.

Referring to the warrior Epizelus during the battle of Marathon in 490BC he wrote: “He suddenly lost sight of both eyes, though nothing had touched him.”

His report co-authored with Dr Walid Abdul-Hamid, Queen Mary College London, argues there are references in the Assyrian Dynasty in Mesopotamia between 1300BC and 609BC.

In that era men spent a year being toughened up by building roads, bridges and other projects, before spending a year at war and then returning to their families for a year before starting the cycle again.

[Read the rest of the article here…]