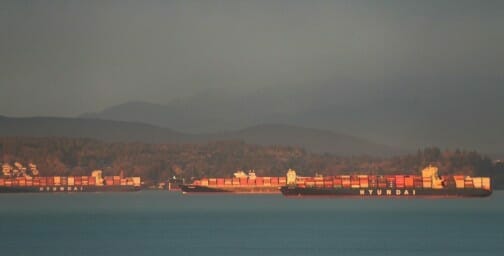 The Port of Seattle issued a statement on February 12, 2015 urging the PMA and ILWU to reach a resolution to their contract dispute:

In light of US West Coast ports’ limited activity this weekend, the ports of Seattle and Tacoma continue to press the Pacific Maritime Association and International Longshore and Warehouse Union to resolve the impasse in contract negotiations.

The ports do not have a seat at the negotiating table, however we have been exercising the limited options available to try to mitigate impacts on our customers and to keep cargo moving.

We share the frustration of the farmers, manufacturers, retailers, truckers and warehouse and distribution operators, who are suffering collateral damage as they continue to lose billions of dollars and lay off employees.

A lockout or strike would put even more stress on the working people throughout our state who rely on ports for their livelihood.

Taken together, marine cargo operations in Tacoma and Seattle support more than 48,000 jobs across the region and provide a critical gateway for the export of Washington state products to Asia.

This protracted negotiation is resulting in widespread economic damage and will have a lasting impact on our state’s economy.

We risk losing our role as a critical gateway as shippers seek alternatives to West Coast ports.

gCaptain reported on the weekend suspension of cargo loading and unloading at west coast ports, noting that the Pacific Maritime Association said that terminal yard, rail and gate operations at the ports, which handle nearly half of U.S. maritime trade and more than 70 percent of imports from Asia, would go on at the discretion of terminal operators through the weekend.  gCaptain quoted a statement from the PMA: “In light of ongoing union slowdowns up and down the coast which have brought the ports almost to a standstill, PMA member companies finally have concluded that they will no longer continue to pay workers premium pay for diminished productivity.”

Announcement of the weekend suspension came two days after the chief labor negotiator for the companies at the 29 West Coast ports warned that waterfronts that have been plagued by severe cargo congestion in recent months were nearing the point of complete gridlock.

The companies have repeatedly accused the International Longshore and Warehouse Union, which represents 20,000 dockworkers, of deliberating orchestrating work slowdowns at the ports to gain leverage in contract negotiations that have dragged on for nine months

The union denies this and faulted the carriers themselves for the congestion, citing numerous changes in shipping practices as contributing factors.

The union also has downplayed the magnitude of the congestion, suggesting that management was exaggerating a crisis as a late-hour negotiation ploy.

Our local West Seattle Blog has been following the (lack of) progress between the PMA and ILWU.  The WSB reported on two days of horrible traffic between West Seattle and downtown, which was caused by a backlog of trucks crowding the surface streets around Terminal 18.  The following day, the traffic had returned to normal.  From an outisder’s perspective, it seemed that the drivers of Seattle had been used as a pawn in the match between PMA and ILWU.