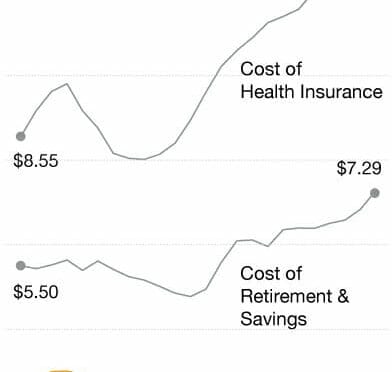 Business and insurance interests are bombarding state legislatures every day of the week to take workers’ rights away by complaining how most states’ workers’ compensation systems are too expensive.

Recently, ProPublica and NPR produced a very detailed explanation of the state of workers’ compensation, focusing, rightly so, on injured workers. This article, which was the first in the series, included an interactive graphic that showed that even though business are complaining about rising premius, workers’ compensation insurance coverage is generally at its lowest rate in 25 years, “even as the costs of health care have increased dramatically,” according to the article.

The offices of Rehm, Bennett & Moore and Trucker Lawyers are located in Lincoln and Omaha, Nebraska. Six attorneys represent plaintiffs in workers’ compensation, personal injury, employment and Social Security disability claims. The firm’s lawyers have combined experience of more than 90 years of practice representing injured workers and truck drivers in Nebraska and Iowa in state-specific workers’ compensation systems. The lawyers regularly represent hurt truck drivers and often sue Crete Carrier Corporation, K&B Trucking, Werner Enterprises, UPS, and FedEx. Lawyers in the firm hold licenses in Nebraska and Iowa and are active in groups such as the College of Workers’ Compensation Lawyers, Workers’ Injury Law & Advocacy Group (WILG), American Association for Justice (AAJ), and the Nebraska Association of Trial Attorneys (NATA).  We have the knowledge, experience and toughness to win rightful compensation for people who have been injured or mistreated.