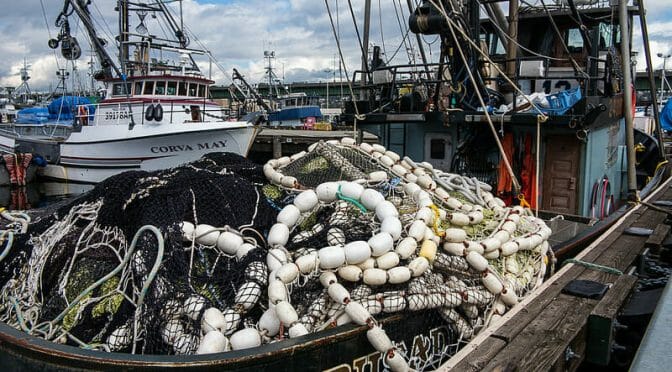 A couple of months ago, Causey Law Firm gave me the opportunity to take part in a tour of Seattle’s Fishermen’s Terminal, Ship Canal, and the surrounding Ballard Locks.  The tour was put on by Port of Seattle, and was part of their “Ship 101” tour series.  Through this tour, I came to appreciate just how essential the area is to the shipping and fishing industries of the Northwest.

Our tour started at Fishermen’s Terminal, where we loaded onto Argosy Cruises’ Lady Mary and disembarked to snake through the Terminal’s aisles of docked boats.  Fishermen’s Terminal serves as a freshwater haven, providing moorage for over 600 of the Pacific Northwest’s fishing and pleasure vessels.

While moorage for pleasure craft was first allowed back in 2001, the Terminal has still retained its industrial roots.  Fishing boats were everywhere I looked, and the places on shore seemed to primarily serve the fishermen and women heading to and from the rich fishing areas off the coast of Alaska.  As the Lady Mary shimmied its way to the Ship Canal proper, I could see dozens of ships, large and small, streaming sparks and glimmering with fresh paint as repair crews made sure they were ready for their next voyage.  Maritime business seems to thrive here, with Vigor Industrial building and repairing boats, Ballard Oil fueling them, Trident Seafood processing their goods, and Foss Maritime shipping those goods and providing towboats as needed.

In fact, Seattle’s highly experienced maintenance, repair, and shipbuilding workforce is a key factor driving Alaskan fishing fleets to travel all the way down to moor at Fishermen’s terminal.  Another is the fact that the Terminal’s moorage is in freshwater, which is significantly less corrosive on ships’ hulls than seawater.  Furthermore, the Terminal is home to a variety of facilities that serve the crews themselves.  Restaurants, a barber shop, maritime law offices, safety training schools, and a post office inhabit Fisherman’s Terminal, providing fishermen easy access to the services they need most.

Freshwater moorage would not be possible without the Hiram M. Chittenden Locks.  Commonly known as the Ballard Locks, it provides boats a way to travel between Puget Sound and Lake Washington by traversing a series of chambers and gates that slowly raise or lower the vessel into the desired waterway.  The locks ensure that The Boat Canal and Lake Washington maintain the salinity of their freshwater by keeping them roughly 20 feet higher in elevation than the salty Puget Sound’s low tide.  The locks also have a fish ladder, allowing migrating salmon to travel to and from spawning grounds.  Perhaps what surprised me most was that this unassuming yet incredibly useful feat of engineering carries more boat traffic than any other lock in the United States, and attracts over a million visitors annually.  With botanical gardens just across the canal from industrial wharves and marinas, it was refreshing to see a space where form and function melded so easily.

After the Lady Mary returned to its moorage at Fishermen’s Terminal, I thanked the tour guides for their informative narrations and, on a whim, decided to grab a bite to eat.  I walked towards a Fishermen’s Terminal pub just as fishermen and support staff got off their shifts and headed in the same direction.  As I dug into a basket of fish and chips and slurped a local IPA after my not-so-long and not-so-treacherous voyage, I couldn’t help but admire the workers that began to fill the place.   I may be a landlubber, but it felt good to be surrounded by these hard-working men and women, and for a moment I almost felt like one of them.  Almost.