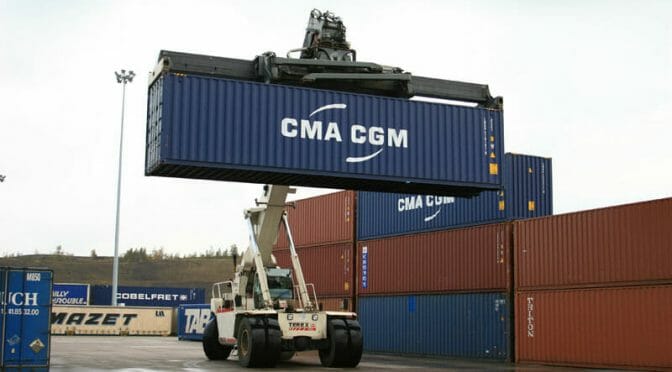 The biggest cargo ship ever to call in North America, CMA CGM’s Benjamin Franklin, arrived in Seattle on February 29, 2016 after it’s inauguration in Long Beach, CA and a stop in Oakland, CA on her way north.  French-based CMA CGM, the world’s third-largest container shipping firm, is taking steps to make it the market leader on trans-Pacific routes.  By May of this year, it will redeploy its flagship fleet of six 18,000 TEU ships on the trans-Pacific routes. Trade with Asia provides support for West Coast port cities and cities across the nation with increased jobs from the docks to the department stores.

Shipping lines have been gradually increasing the size of vessels for decades, taking advantage of improving technology and engineering to reduce fuel and labor costs. U.S. ports, meanwhile, have struggled to keep up with the growing size of the ships, spending billions to deepen harbors, raise bridges and improve onshore infrastructure like roads and rail connections.

Jock O’Connell, an international trade economist affiliated with Beacon Economics, said CMA CGM’s move to integrate the new ships into its trans-Pacific service so rapidly was a surprise. The Benjamin Franklin calls at several West Coast ports in recent months appeared to be test runs of the ability of the ports to handle the ships.

Seattle is in the midst of a major renovation of Terminal 5 to accommodate megaships like the Benjamin Franklin, improving dockside services, installing larger cranes and dredging to increase depths to allow for the deeper draft vessels.  The Benjamin Franklin, one of the largest container cargo vessels, capable of carrying 18,000 TEU, has a 52’ draft and is about a third larger than the biggest container ships that currently visit the deep water ports of southern California.

Thanks to the West Seattle Blog for other stats – besides the ship being more than twice as long as the 605-foot Space Needle is tall – it’s 177 feet wide and 197 feet high (roughly equal to a 20-story building), with its tallest antenna topping out at 230 feet.

Check out the fantastic photo tour of the Benjamin Franklin on gCaptain!