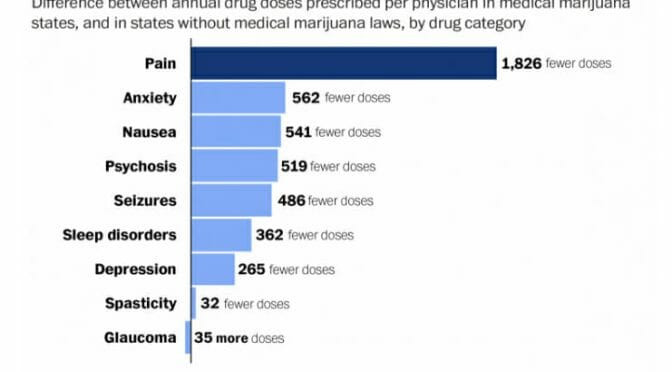 There’s a body of research showing that painkiller abuse and overdose are lower in states with medical marijuana laws. These studies have generally assumed that when medical marijuana is available, pain patients are increasingly choosing pot over powerful and deadly prescription narcotics. But that’s always been just an assumption.

Now a new study, released in the journal Health Affairs, validates these findings by providing clear evidence of a missing link in the causal chain running from medical marijuana to falling overdoses. Ashley and W. David Bradford, a daughter-father pair of researchers at the University of Georgia, scoured the database of all prescription drugs paid for under Medicare Part D from 2010 to 2013.

But most strikingly, the typical physician in a medical-marijuana state prescribed 1,826 fewer doses of painkillers in a given year.

Read the full article on the Washington Post site.