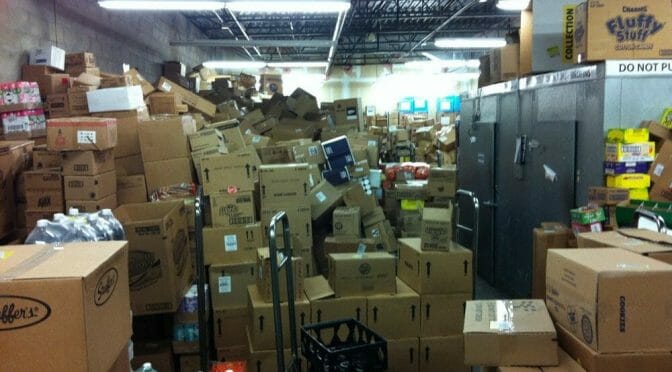 Note: A quick Google search led me to Glassdoor’s page covering Dollar Tree stores.  Many photos, mostly posted by managers and bemoaning their impossible working conditions, clearly show that the problem identified in Washington is widespread. The caption for the above photo reads “3,000 cartons in per week…” – kc

The Department of Labor & Industries (L&I) recently cited the Virginia-based employer after an inspection at its Aberdeen store found serious, repeat safety hazards.

The company was cited for two willful safety violations, each with the maximum legal penalty of $70,000. Dollar Tree also received a $5,200 fine for a repeat-serious violation. The employer was previously cited for the same violations at its Chehalis location.

The first willful violation was for storing merchandise in a way that created a serious hazard. The inspection found the storage room was a crowded jumble of stacked boxes, bundles and containers that weren’t secured and could topple over at any moment. The haphazard stacks stood as high as nine feet, with heavy boxes piled on top of light ones. Some were leaning due to collapsed boxes or crushed corners.

Improperly stored merchandise can fall on employees causing serious injuries including contusions, broken bones, concussions or even death if the boxes cause an employee to fall and strike their head on the floor. Additionally, lifting heavy boxes into nine-foot stacks is likely to cause strains and sprains or serious back injuries.

The second willful violation cited was for not ensuring that exit routes were free of obstructions. At the time of the inspection, several aisles and passageways were blocked with merchandise. Employees did not have clear paths to emergency exits, and a doorway with two swinging doors couldn’t be exited because it was obstructed by stacks of merchandise or carts full of products.

In addition, there were hazardous products stored in the area, including helium cylinders that are explosive when heated, lighters, and plastic merchandise that would emit toxic fumes in a fire, increasing the danger to employees.

Dollar Tree was cited for a repeat-serious violation for not installing protective guarding or covers over light fixtures that could be struck and broken by the stacked merchandise. Breakage of overhead bulbs is likely to cause eye injuries or cuts from falling glass.

A serious violation exists in a workplace if there is a substantial probability that worker death or serious physical harm could result from a hazardous condition. A willful violation can be issued when L&I has evidence of plain indifference, a substitution of judgment or an intentional disregard to a hazard or rule.

The employer had 15 business days to appeal the citation.