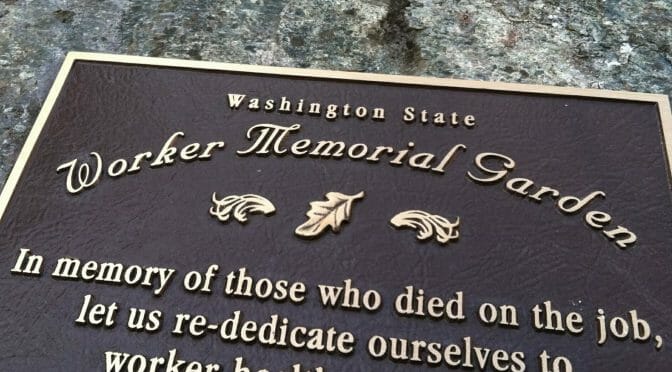 The state ceremony is one of many held in communities across the nation in April to remember those who died from work-related causes.

Families of the fallen workers were invited to attend the service, which included comments from speakers, a reading of the names of the workers who have died, and an outdoor portion where relatives were invited to ring a bell hanging in L&I’s Worker Memorial Garden. The names of the workers were also entered into a Worker Memorial book, displayed in the agency’s lobby.

Eight truck drivers, five loggers, two nurses, a police officer, a fire chief and a flagger are among the 79 people who died from work-related causes who were honored at this year’s Worker Memorial Day observance. The men and women range in age from 19 to 90 and did all types of work, including retail clerk, business owner, truck driver, farmworker, chiropractor and arborist.

“Work-related deaths are devastating for the families and friends left behind. We should all be able to count on our loved ones returning home from work safely each day,” said L&I Director Joel Sacks. “There’s no greater legacy that we could create than preventing tragedies like these from ever being repeated.”

Falls happen in all types of jobs, and they remain a leading cause of worker deaths. Violent crime also impacts workplaces. Eight work-related deaths last year were homicides, the highest number since 2009. Overall, recent data shows construction, trucking and agriculture continue to be among the most hazardous jobs for Washington workers.

Workplace deaths in Washington are declining. In the early 2000s job-related deaths often numbered more than 100 annually. Still, Director Sacks said even one work-related death is too many.

The 79 workers who were remembered during the ceremony included those who died of incidents that happened in 2016, and people who passed away last year as a result of previous work-related illnesses or injuries. The ceremony also honored 12 people who died before 2016 but whose deaths were not included in previous observances.

For a complete list of those being honored, with photos and family comments for many of those honored, read more here.