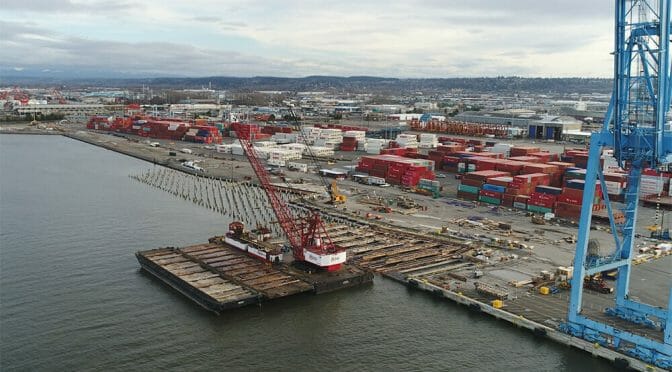 The Northwest Seaport Alliance provided the following update of the South Harbor Pier 4 project to expand and fortify the pier to receive the new megaships. The project employs workers in the construction trades and, once completed, will lead to greater cargo coming through the port, potentially increasing longshore and harbor worker employment.

The Pier 4 reconfiguration is taking shape on the General Central Peninsula in the South Harbor. Crews are working heavily on pier construction and installing underground utilities, including electrical, communication, sewer and stormwater treatment.

Since awarding the contract to Manson Construction Company and launching the first phase of the project in May 2016, the 1,724-foot pier at the Port of Tacoma nears its halfway mark.

In February, Manson wrapped up the first phase of the pile driving, which set up the foundation for the structure that will be capable of serving two 18,000-TEU container ships once completed.

“Bigger ships require bigger cranes, and bigger cranes require a stronger foundation to evenly distribute the load,” said Trevor Thornsley, senior project manager for the Port of Tacoma. “Building the pier is all about providing enough support to handle the heavy cranes and the heavy load of the trucks, straddle carriers and the equipment that run on the pier.”

Each pile, varying from 70 to 170 feet in length, is precisely driven underwater in a neat row formation. The segments are then bound together with rebar and concrete to create a thick platform called a pile cap. Once pile caps are built, the crew will place 25-foot-wide deck panels between the caps and fill any gaps with more concrete. At the end of the project, the pier will be covered with 3 to 6 inches of pavement.

The second phase of pile driving is slated to resume in July. The project is expected to be completed in spring 2018.

Watch a video of the latest progress and learn more about the Pier 4 project.

In a related post, the Northwest Seaport Alliance reported on the potential for additional crane purchases for Pier 4:

The Managing Members will consider purchasing four additional cranes from Zhenhua Port Machinery Company (ZPMC) in China at their June 6 special joint meeting. The Managing Members approved the purchase of the first four super post-Panamax container cranes in 2016 to handle larger ships. If the additional cranes are approved, all eight cranes are expected to arrive in spring 2018 at South Harbor’s Pier 4, where it is currently undergoing reconfiguration improvements.

Download and watch a video of the June 6 meeting here.