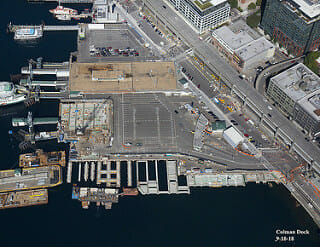 Colman Dock in Seattle is the largest Washington State Ferries terminal and supports transportation across Puget Sound between downtown Seattle and communities in Kitsap County and the Olympic Peninsula. Key components of Colman Dock are aging and vulnerable to seismic events. The layout of today’s facility also creates safety concerns and operational inefficiencies due to conflicts between vehicles, bicycles and pedestrian traffic.

The Washington State Department of Transportation (WSDOT) has undertaken an enormous project to repair the multimodal terminal at Colman Dock without interruption to ferry service.

Construction will continue until 2023 and the terminal will remain open throughout construction.

For a full description and details, see the WSDOT page dedicated to the project.  More pictures are available on the WSDOT Flickr page, as well.