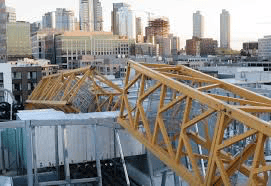 The Division of Occupational Safety and Health (DOSH) issued a Hazard Alert in June 2019 discussing roles, responsibilities, and procedures during tower crane erection and dismantling. Read the full DOSH Hazard Alert: Roles, responsibilities, and procedures during the erection and dismantling of tower cranes.

The hazard alert was issued in response to an April 27, 2019 incident where a construction tower crane collapsed in Seattle, Washington while being dismantled, fatally injuring two workers and two members of the public.

The Department of Labor and Industries completed it’s investigation in October 2019. During the investigation, it was found that the conditions leading up to the collapse may not have been an isolated event, but was due to procedures that have been practiced throughout the industry.

The state issued citations to: GLY Construction, Northwest Tower Crane Service, and Morrow Equipment, totaling over $107,000.00. The state did not cite two other companies involved, Omega Morgan and Seaburg Construction.

On November 4, 2019, DOSH issued Directive, 8.55 – Tower Crane Erection and Dismantling Violations which clarified the rules for the erection and dismantling of tower cranes, and established a willful penalty classification for specific tower crane erection/dismantling safety violations.

The April 2019 accident, which was found to have been “totally avoidable,” prompted the state to craft and implement the new regulations outlined in Directive 8.55.

WAC 296-155-53402 sets out the rules for safety practices when assembling and disassembling a crane/derrick.

For more information about the April 2019 accident, the Department of Labor and Industries investigation, and the citations issued, look to The Seattle Times coverage, including: