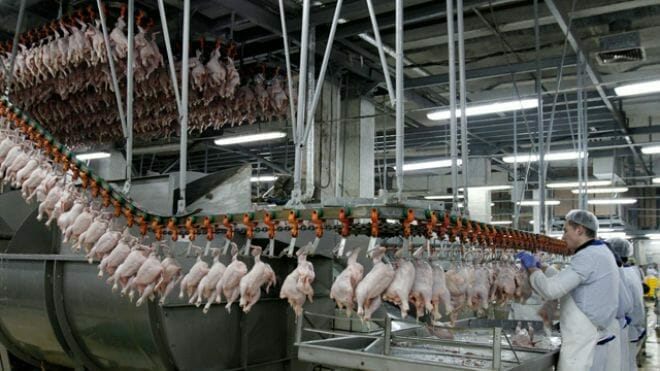 Several members of Congress have written to Secretary of Labor Tom Perez, Secretary of Agriculture Tom Vilsack and Secretary of Health and Human Services Sylvia Burwell regarding the danger of the chemical PAA, which is used to sanitize chickens in poultry plants.

According to The Pump Handle blog written by occupational health expert Celeste Monforton, the increase in the use of PAA is linked to the Department of Agriculture’s “modernized inspection” system. Though meatpacking is well known for the prevalence of musculoskeletal injuries, chemical exposure is a less well-known, but similarly serious hazard, to meatpacking workers, which has been recognized by the Occupational Safety and Health Administration.

The hazards of chemical exposure are not limited to meat-processing workers. Chemical exposure fatalities are too common in rural America. Recently, a worker on an industrial cleaning crew in Beatrice, Nebraska, was killed from inhaling industrial cleaning chemicals. In October, a resident of northeast Nebraska was killed after inhaling chemicals from a leak in anhydrous ammonia pipeline. That same month, 125 residents of Atchison, Kansas, sought treatment for inhalation of chlorine gas from an explosion at a distiller.

While chemical exposure can often result in sudden death, ongoing exposure to chemicals can also create injuries that may not be apparent for years after the exposure. Unfortunately, Nebraska limits the ability of workers to recover for such injuries.

The letter about the hazards of PAA was written to outgoing cabinet members. The new Trump administration is expected to have a less-aggressive approach toward regulating the workplace. Hopefully the new administration will take the threat posed by hazardous chemicals in the workplace seriously.