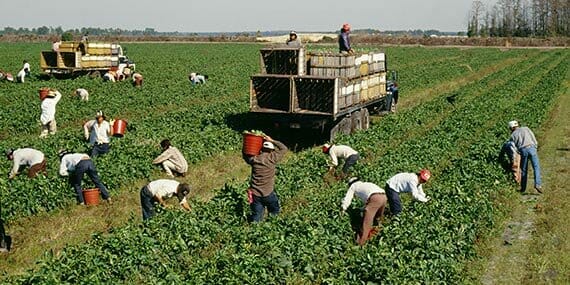 The violation issued to Agri Aide Inc. is the largest L&I fine ever against a farm labor contractor. The penalty is based on the firm’s history of repeated violations. Agri Aide did not file an appeal and made payment toward the infraction.

As a farm labor contractor, Agri Aide is one of about 250 firms across the state that hires, organizes, and transports workers to farms. Under law, contractors must provide each worker written notice about pay, housing, safety requirements, and other conditions.

“Often, these workers are happy just to have a job; they’re not looking at whether the person who got them the job has a license,” said Tisa Soeteber, agricultural employment specialist at L&I. “L&I is going after repeat offenders like Agri Aide to stop unlicensed contractors from both competing with legitimate farm labor contractors and putting workers at risk.”

Marivel and Jose Luis Brunetti, Agri Aide owners, operated the company without a farm labor contracting license in at least 2012, 2013, and 2015. Agri Aide received the maximum fines in those cases, which included forging a contractor license in 2012 and failing to tell workers about the conditions of their employment in 2015.

L&I began its investigation in May after receiving a complaint. It involved Agri Aide laborers at Williamson Farms, in Quincy, WA, transplanting chili plants.

Williamson Farms hadn’t checked the Agri Aide license since 2006. The farm told L&I it would no longer work with any unlicensed contractor.

Soeteber said farmers should check annually for the license of their farm labor contractor. She said the Farm Labor Contractor Act protects workers’ rights and limits the liability a farmer may face for using an unlicensed firm.

Information about farm labor contracting is available by emailing ESgeneral@Lni.wa.gov, calling 1-866-219-7321, or going online to www.Lni.wa.gov and typing “Farm Labor Contractors” in the search box.