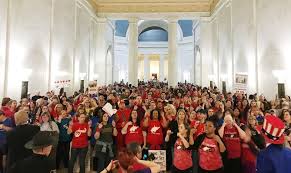 Teachers in West Virginia won a victory for working people recently after a nine-day strike forced lawmakers and their Governor to raise the pay of all public employees by 5 percent, agree to fix problems with the state’s health insurance system and maintain other employee protections.

The victory for the West Virginia teachers came shortly after many pundits predicted the downfall of public sector unions in the wake of an expected unfavorable decision from the Untied States Supreme Court in the Janus case. Many commentators pointed out that West Virginia was already a “right to work” state where unions can not compel the employees they represent to pay dues.

The West Virginia teachers strike shows the power of collective action among employees. I have long advocated that employees exercise their rights under the National Labor Relations Act to work together to address the terms and conditions of their employment. Employees don’t need a union to exercise these rights. Collective action on the job can address bullying by a boss and can even help employees accommodate a disability.