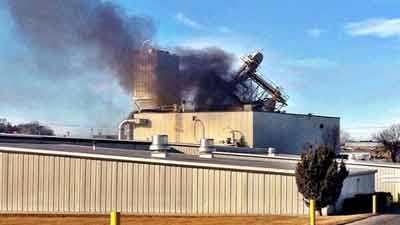 I was going to write about a summary from the official OSHA news release and provide a compilation of web resources regarding the Jan. 20 International Nutrition building collapse in Omaha. This is relevant now because the Occupational Safety and Health Administration (OSHA) quite recently found the cause of the collapse after an investigation and levied proposed fines for the tragedy that killed two, injured nine, and doubtlessly affected all the other workers at the plant and all those folks’ loved ones in the greater community.

“OSHA has proposed penalties of $120,560 and placed the company in its Severe Violator Enforcement Program after its investigation into the collapse,” according to the official news release from OSHA.

The building’s collapse was because of “overloading nine storage bins on the building’s roof level,” the news release said, and the company was also placed on OSHA’s Severe Violator Enforcement Program.

Here is one link that was more of what I was expecting from the OSHA news release:

However, the business did respond via statement to at least three local media channels, and links to those stories are below. The level of denial by the business was frustrating, and I think the Omaha World-Herald newspaper nailed the tone of the story with its headline: “International Nutrition disputes OSHA’s conclusions that overloaded rooftop bins caused collapse.”

So not only does “the company strongly disagree with OSHA’s report,” it is “saying the citations are only allegations and that company officials didn’t know of any condition that contributed to the collapse,” said the reporter for KETVOmaha7 (this quote is attributed to International Nutrition’s attorney, Pat Barrett in the World-Herald article).

The business’ statement also included this quote from the WOWT.com story: “We look forward to presenting the facts demonstrating our commitment to employee safety – both before and after the accident. … At the same time, we welcome the opportunity to work with OSHA to continue to improve employee safety.”

I thought this was telling about the company’s “commitment to employee safety” from the WOWT.com article:

“In total, OSHA has visited the facility 13 times dating back to 1974. Eight of those visits led to violations; however, it had not landed on the Severe VEP program until now. OSHA officials told WOWT 6 News that usually occurs when companies rack up violations of $100,000 or more.”

To get more in-depth information, here are links to both the company’s statement at http://www.omaha.com/international-nutrition-s-july-statement/article_0997a878-10fc-11e4-8481-0017a43b2370.html and OSHA’s Citation and Notification of Penalty report at https://www.osha.gov/ooc/citations/International_Nutrition_955579_Jul18_2014.pdf

“The company manufactures a feed supplement using multiple dry ingredients, rice hulls, solulac and limestone – the ingredients that were stored in the nine bins on the roof of the structure,” according to the KETVOmaha7 report.

The reality when it comes to workers’ compensation and lawsuits is nuanced, but the incident is stark in its details, and this information is from multiple news sources.

In 30 seconds, “close to 1 million pounds of steel, concrete, equipment and ingredients crashing through the plant” occurred, according to the World-Herald.