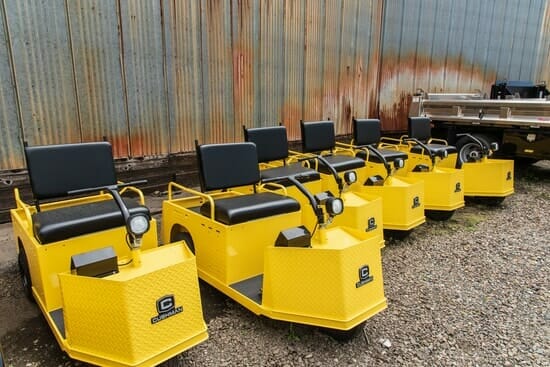 When the SR 99 tunnel opens, a fleet of tiny trucks will help WSDOT crews maintain the tunnel – traveling in places most of us will never see. While you drive underneath Seattle, your car might be just a few feet above maintenance workers doing their jobs in these bright, yellow trucks.

WSDOT received nine new maintenance vehicles over the summer. The vehicles will move into the new SR 99 tunnel after tunnel contractor Seattle Tunnel Partners completes all tunnel systems testing and turns the tunnel over to WSDOT. The four-wheelers will travel the two-mile road beneath the tunnel’s lower roadway; the smaller, three-wheel versions can drive in the narrow corridors on the tunnel’s west side (see graphic below).

All nine trucks are electric and will be housed in the tunnel’s north operations building where they can be recharged by simply plugging them into a standard outlet.

Bigger maintenance jobs will require bigger equipment, like bucket trucks and flatbed lift trucks. All total, more than 30 pieces of equipment will make up the tunnel maintenance fleet dedicated to traffic and maintenance inside Seattle’s newest tunnel.

The tunnel could open as soon as this fall, after an approximately three-week viaduct closure to realign SR 99 into the new tunnel.