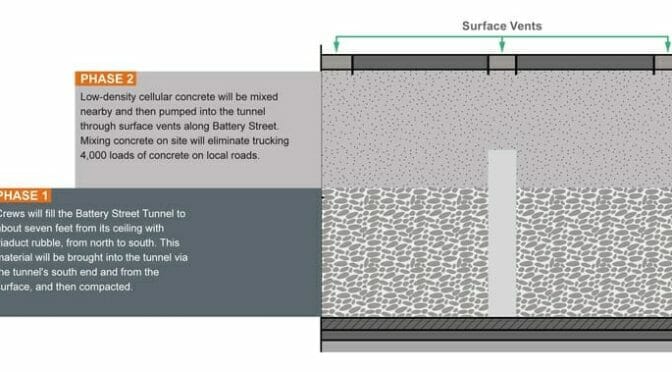 Contractor Kiewit Infrastructure West Co., began demolishing the Alaskan Way Viaduct on Feb. 15. Over the course of approximately six months, they will use large machinery to crunch, munch and cut the structure into pieces to be hauled away by truck. When the viaduct is gone, the City of Seattle will begin work on a new surface street and public open space along the waterfront.

The work of filling and sealing the Battery Street Tunnel began on on Feb. 12, 2019 and is scheduled to be complete in late 2020. The major elements of this work are:

The tunnel will be filled in two phases, with material brought into the tunnel both from its south entrance and through grates along Battery Street above. Crews will partially fill the tunnel with viaduct removal rubble and then will pump in low-density cellular concrete from above to complete the fill.