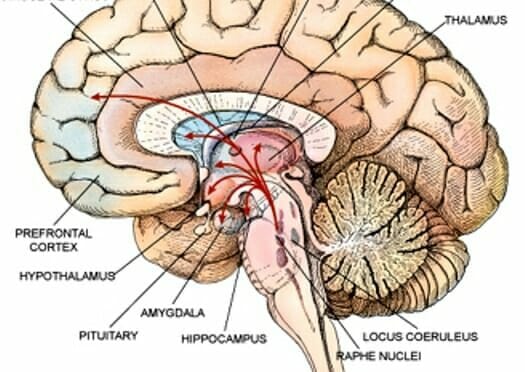 Today’s post is the first in a multi-part series about stress, covering first the biology of stress and the effects of chronic stress on the body.

Stress is a term that is commonly used to explain — or explain away — much in our world.  We live in a time of multifactorial stress: the economy; keeping, losing or getting jobs; housing, food, medical and dental care; personal and familial safety; fear or anger over political or governmental decisions; injuries and/or disabilities. At times, stress can be overwhelming when it seems we are losing control over our lives and our futures.

The following is an overview of the biology of stress to help better understand how stress can control such a large part of our health. There are many types of stress and those will be investigated after first laying out a basic understanding of what stress is and the physiologic mechanisms of stress.

The term stress is derived from the Latin word stringere, “to draw tight.”

The term stress is derived from the Latin word stringere, “to draw tight.” It had been used almost solely in the field of physics to define the internal distribution of a force exerted on a material body, resulting in strain — or stress — such as a rubber band pulled tautly.  In the 1920s, stress started to be used in both biology and psychology, referring to a mental strain or a harmful external agent that could cause illness. Interestingly, in an early example, researcher Walter Cannon used the term strain/stress in 1926 to refer to external factors that disrupted homeostasis.1

The idea of stress and homoeostasis is intriguing for it is widely known that the incredible human system strives to maintain homeostasis, or equilibrium. So, it makes great sense that maintaining equilibrium is central to the idea of stress. This is true with all biological and most biochemical processes. The body always attempts to maintain this steady state of being; however, environmental factors, internal or external, continually challenge and disrupt this equilibrium (homeostasis) causing the body to constantly strive for balance. Environmental factors causing the body continued strife are generally called stress. Stress can be simply moments or events from which the body returns to equilibrium or it can turn into chronic stress where the body is constantly trying to reach homeostasis against resistance.

The balance of our body systems can be disrupted (stressed) by events from such disparate sources as a life-threatening situation or a simple insult, resulting in disequilibrium. Stress can bring on a cascade of biological reactions as the body attempts to bring the body/mind back to equilibrium, using incredible energy and resources in the process. The body’s fight or flight response recruits the body’s energy stores and focuses all resources on overcoming the event challenging homeostasis. Chronic stress can start a chain of events, called a cascade, within us.  Whether stress is from internal or external forces, or both, we can become ill or, if already ill or injured, we can become worse as a result of stress in our lives.

Hans Selye in his book, The Stress of Life, (New York: McGraw-Hill, 1956 – still considered a standard and oft cited in review of the stress literature but, unfortunately, out of print today) described stress as something that “…in addition to being itself, was also the cause of itself, and the result of itself.”  First to use the term in a biological context, Selye continued to define stress as “the non-specific response of the body to any demand placed upon it.”

The intensity and duration of stress changes depending on the circumstances and emotional condition of the person suffering from it.

The intensity and duration of stress changes depending on the circumstances and emotional condition of the person suffering from it. Both negative and positive stressors can lead to stress. Some stressors might include: the workplace, unemployment, or performance pressure stress from project deadlines; noise, temperatures, or environmental issues including a lack of control over environmental circumstances; food, air and/or water quality, housing, health, or mobility; struggles with difficult individuals, relationship problems, or major life events, such as injury or disability.

Stress in humans is a method of reacting to difficult and possibly dangerous situations. The “fight-or-flight” response when one perceives a threat helps the body exert energy to fight or run away. In the fight-or-flight response the adrenal glands release epinephrine, causing the blood vessels to constrict and heart rate to increase. Cortisol (to be discussed in detail later) is released in stress and its purpose is to raise the glucose levels in the blood. Glucose is the main energy source for human cells and its increase during time of stress gives immediate energy for overactive cells. The release of these hormones is intended to be temporary. Someone under stress for long periods of time may have adverse health effects later on, such as hypertension and increased risk of cardiovascular disease. The biology of stress is very similar to that described, albeit in less detail, in our three part article on Worry (May 2012).

In the physiology of stress, the central nervous system works closely with the body’s endocrine system to regulate mechanisms of equilibrium.

In the physiology of stress, the central nervous system works closely with the body’s endocrine system to regulate mechanisms of equilibrium. The sympathetic nervous system (nerves responsible for regulating many homeostatic mechanisms) becomes primarily active during a stress response, regulating many of the body’s functions in ways that make the body more adaptive to its environment.  The brain works in network carrying information about a stressful situation across many regions of the brain and back.

The major players of stress in the brain include: the hypothalamus, the amygdala, the hippocampus, the pituitary gland and regions of the brain called locus coreruleus and rafe nucleus. The hypothalamus is located above the brainstem. Its primary function is to help link the body’s nervous and endocrine systems using neural inputs and outputs to and from other regions of the brain to make regulated secretions of hormones into the body’s blood stream. It has a far-reaching and long-lasting effect on physiological processes such as metabolism. During a stress response, the hypothalamus secretes corticotropin-releasing hormone that stimulates the pituitary gland initiating regulated stress response pathway.

The amygdala, part of the brain’s limbic system, is part of this neural network and plays a role in the processing of emotions in the stress response mechanisms of anxiety or fear (as discussed in the article “Worry” May 2012).

The hippocampus, also a part of the brain’s limbic system, plays an important role in memory formation. The hippocampus includes networks from the cerebral cortex, hypothalamus, and amygdala. During stress, the hippocampus responds in cognitive processes such as prior memories that can have a great influence on enhancing, suppressing, or even independently generating a stress response, as in PTSD.  The hippocampus is an area in the brain that is susceptible to damage brought upon by chronic stress.

The locus coreruleus is the principle site of synthesis of the neurotransmitter norepinephrine which plays an important role in the sympathetic nervous system’s fight-or-flight response to stress. The rafe nucleus primarily synthesizes the neurotransmitter serotonin, whose role is mood regulation, particularly when stress is associated with depression and anxiety.  It may also play a part in modulating the sensation of pain. The pituitary gland is located at the base of the brain just under the hypothalamus and releases various hormones that play significant roles in regulating homeostasis. During a stress response, the pituitary gland releases hormones into the blood stream that modulate stress response systems.

The spinal cord has a critical role in transferring stress response neural impulses from the brain to the rest of the body. In addition to the blood hormone signaling system initiated by the hypothalamus, the spinal cord communicates to the rest of the body by innervating the peripheral nervous system (nerves outside the brain). Some nerves of the central nervous system exit the spinal cord and stimulate peripheral nerves, which in turn engage the body’s major organs and muscles in a fight-or-flight manner.

The HPA axis (hypothalamic–pituitary–adrenal axis) is an exceedingly important multi-step biochemical process in which information is transmitted from one area of the body to the next via chemical messengers. Each step in this pathway not only passes information along to stimulate the next region but also receives feedback from chemical messengers produced later in the pathway to either enhance or suppress earlier steps. Thus, it is one method a biochemical pathway can regulate itself (as briefly discussed in the Worry Article May 2012.)

When the hypothalamus receives signals from one of its many inputs about conditions that deviate from an ideal homeostatic state, such as alarming sensory stimulus, emotionally charged event, or energy deficiency, this becomes the initial step of the stress-response cascade. The hypothalamus is stimulated by its inputs and then proceeds to secrete corticotropin-releasing hormones that are  transported to the target, the pituitary gland, via short blood vessels system, to which it binds and causes the pituitary gland to, in turn, secrete its own messenger, adrenocorticotropic hormone, systemically into the blood stream. When adrenocorticotropic hormone reaches and binds to its target, the adrenal gland, the adrenal gland in turn releases the final key messenger in the cascade, cortisol.

Cortisol, once released, has widespread effects in the body. During an alarming situation in which a threat is detected and signaled to the hypothalamus from primary sensory and limbic brain structures, cortisol is one way the brain instructs the body to attempt to regain homeostasis – by redistributing energy (glucose) to areas of the body that need it most, that is, toward critical organs (the heart, the brain) and away from digestive and reproductive organs.

After enough cortisol has been secreted to best restore homeostasis, and the body’s stressor is no longer present or the threat is no longer perceived, the heightened levels of cortisol in the body’s blood stream eventually circulates to the pituitary gland and hypothalamus to which cortisol can bind and inhibit, turning off the HPA-axis’ stress-response cascade.  This prevents additional cortisol from being released. This is a normal, healthy stress mechanism in response to a situation or stressor that threatens homeostasis.

However, if the response to emotional pressure is suffered for a prolonged period, over which an individual perceives he or she has no control, stress becomes chronic. If this continues for a long time, it can cause damage to an individual’s physical and mental health.