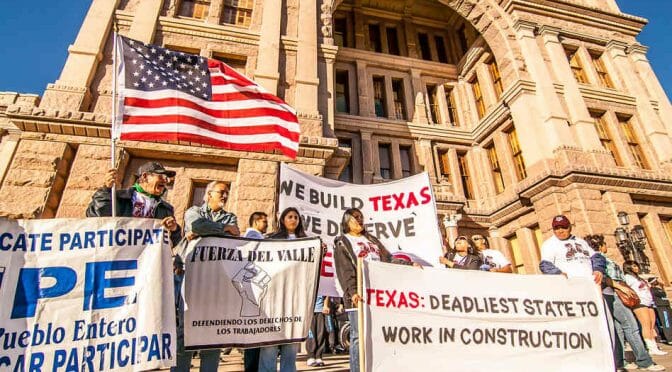 We have been listening with interest to a recent National Public Radio (NPR) series about construction workers and businesses in Texas. The series about this industry confronts many of the issues that are being debated by society these days, whether in the judicial, executive or legislative branches.

To add some context, these topics include employing immigrant workers; paying a living wage; calling an employee an independent contractor; and ensuring workplace safety, workers’ compensation, and payroll taxes are all done, practices that specifically are not happening in Texas, according to the stories. A notable quote from the first piece is “Texas is the only state in the nation without mandatory workers’ compensation, meaning hospitals and taxpayers usually end up shouldering the cost when uncovered construction workers are hurt.” And we think the information from the second piece is quite telling that the business owner “asked that NPR not use his last name because the IRS might take an interest in his business, designs and builds landscapes in the Dallas-Fort Worth area.” Because he treats his crew as “self-employed contractors,” meaning that the IRS would likely see his interpretations of tax law as illegal. From the story: “This is a key distinction. If Trent were to classify his workers as employees, he’d have to pay taxes, Social Security, unemployment and overtime. But by saying his workers are actually independent contractors – in essence, business owners – he’s off the hook.”

We think listening to these two pieces, at less than 15 minutes total, is a good opportunity to experience an applied illustration of what happens to the vulnerable when such protections as workers’ compensation are effectively dismantled for profit-taking and political reasons. Respected colleague Jon Gelman in New Jersey recently wrote a blog post that focuses on the first NPR report and “how bad it is for workers who get injured in Texas.”

In Nebraska, the anti-worker, pro-business Nebraskans for Workers’ Compensation Equity and Fairness group is backing LB 584 that would dramatically limit protections that workers have when it comes to being injured through a concept called evidence-based medicine/utilization review. In addition to our firm writing numerous blog posts about this legislation, EBM/UR is #8 in Ms. Stanton’s list of “trends throughout the country which would negatively impact existing Workers’ Compensation benefits.” And according to this article, politicians in Tennessee are looking to gain some brownie points with business and insurance by overhauling the workers’ compensation courts to the detriment of injured workers. Iowa workers and attorneys have to contend with #6 on the list, restricting doctor choice, while a bill in Nebraska’s legislature is in the works to do the same if passed.

We agree with what Ms. Stanton writes: “All workers need to be aware of these trends because the likelihood of legislation being introduced in their state against their interests is strong. Employee immunity has remained untouched, but workers’ benefits are consistently under attack as a result of the collective lobbying efforts of the insurance industry and large corporations.   Unfortunately the great compromise is turning out to be one sided as workers are forced to endure multiple obstacles and hurdles to be entitled to fewer and more restricted benefits.”

So we would encourage you to join us in educating yourselves about how workers’ compensation “reform” can lead to stories like NPR’s cautionary tales about the construction industry in Texas and to explore what’s going on in your state legislature. Finally, get involved in your state’s political process to advocate for workers!