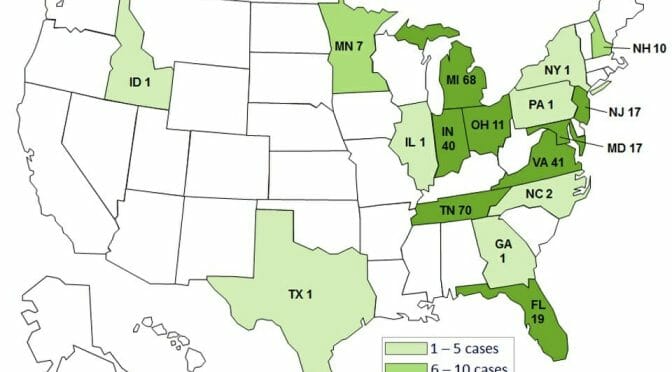 The Centers for Disease Control and Prevention (CDC) and the Food and Drug Administration (FDA) are coordinating a multi-state investigation of fungal meningitis among patients who received an epidural steroid injection. Several of these patients also suffered strokes that are believed to have resulted from their infection. Fungal meningitis is not transmitted from person to person. These cases are associated with a potentially contaminated medication. Investigation into the exact source is ongoing; however, interim data show that all infected patients received injection with preservative-free methylprednisolone acetate (80mg/ml) prepared by New England Compounding Center, located in Framingham, MA.

Patients who have had an epidural steroid injection since July 2012, and have any of the following symptoms, should talk to their doctor as soon as possible:

Patients need to remain vigilant for onset of symptoms because fungal infections can be slow to develop.

Typically in this outbreak, symptoms have appeared 1 to 4 weeks following injection, but it’s important to know that longer and shorter periods of time between injection and onset ofsymptoms have been reported. Therefore, patients and physicians need to closely watch for symptoms for at least several months following the injection.

The CDC’s guidance to patients has not changed as a result of the expanded voluntary recall of all NECC products, announced October 6. Patients who feel ill and are concerned about whether they received a medication from one of the NECC products recalled on September 26 should contact their physician.