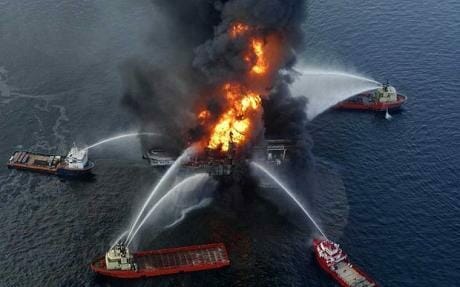 British Petroleum (BP) supervisors Donald J. Vidrine and Robert Kaluza were indicted on manslaughter charges in the deaths of 11 fellow workers in connection with the 2009 Deepwater Horizon explosion in the Gulf of Mexico. David Rainey, a BP deepwater explorer, was charged with obstruction of Congress and lying about the size of the spill. These indictments were in addition to a record $4.5 billion in criminal fines that BP agreed to pay for the disaster, which will be paid out over 5 years.

Mr. Vidrine and Mr. Kaluza were negligent in their supervision of key safety tests performed on the drilling rig, and they failed to phone engineers on shore to alert them of problems in the drilling operation. These charges carry maximum penalties of 10 years in prison on each “seaman’s manslaughter” count, 8 years in prison on each involuntary manslaughter count and a year in prison on a Clean Water Act count. Mr. Rainey obstructed Congressional inquiries and made false statements by underestimating the flow rate to 5,000 barrels a day even as millions were gushing into the Gulf. He faces a maximum of 10 years in prison.

By charging individuals, the government was signaling a return to the practice of prosecuting officers and managers, and not just their companies, in industrial accidents where reckless and wanton conduct is involved. The practice of charging individuals was more prevalent in the 1980s and 1990s but has recently been a rare occurrence, with company fines being the only penalty sought. Some wonder if the $4.5 billion criminal settlement is enough to penalize a corporation after 11 people were killed, and that if a culture of  disregard for safety exits in a corporation that is “too big to fail” then the only way to stop that culture is to send those who knew about it to jail. We shall see.