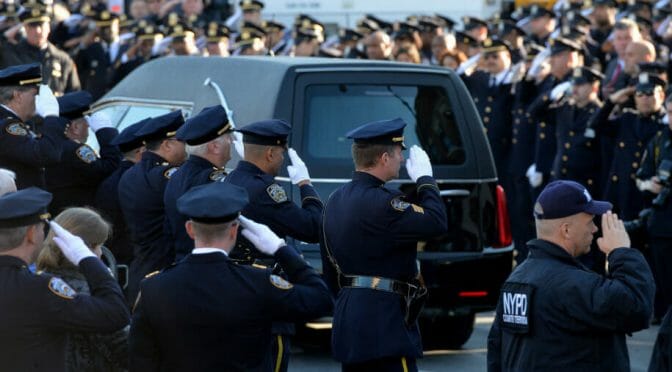 Last week was a very bad one for police officers across the country, starting with the separate police shooting of two unarmed men. These shootings – days apart in different parts of the country – sparked widespread outrage and protests throughout the country.

While the investigation continues into the circumstances surrounding these civilian shootings, video evidence suggests the outrage over these shootings appears to be justified. The week ended with the assassination of five police officers in Dallas who were providing protection to citizens engaged in a peaceful protest over the shootings of the unarmed men. The gunman indicated he had killed the police officers in retaliation for the shooting deaths. This was the worst loss of life for the police department since September 11, 2001.  Additionally, seven police officers were injured in the attack.

These horrific events highlight the difficult job that police face every day. While not all police officers are perfect (in fact, who amongst us is?), most don’t begin their shifts with the mindset that they are going to kill a civilian. Most see their role as keeping the peace and protecting citizens. They do, however, wonder many times whether they will make it through their shift safely and return home to their loved ones.    Unfortunately, they are not always immune to death and injury.

As an attorney who has represented many law enforcement officers injured on the job, I know the majority of them receive medical treatment and may have a period of convalescence, but then are able to return to work. However, some sustain serious and career-ending injuries. Most police officers in New York City and Long Island are likely a member of a Civil Service Retirement System. If so, and they become permanently disabled from performing their specific job duties, they may be eligible for a life-long disability pension.

There are many pension systems in the state, all with different applications, rules, procedures, and guidelines. Each disability pension has its own statute of limitations and guidelines for eligibility. There are different pensions available, ranging from one-third to three-quarters. Just because you were injured on the job does not mean you are automatically entitled to the three-quarter pension, which would enable you to receive 75% of your previous year’s earnings.

Although not always relevant, how police officers are injured on the job can impact whether they are entitled to a three-quarter disability pension. Additionally, just because they were injured while working does not automatically mean they are entitled to a three-quarter disability pension. Factors that get taken into account are issue of causation, medical evidence from the officer’s own doctor, and the retirement system’s medical board. It is not always an easy process for our law enforcement personnel to receive reasonable retirement benefits, but it should be. Day in and day out, they protect the citizens of our cities and our states, putting their own lives at risk simply because they are dressed in blue.

There is a huge spotlight this week on police, and rightfully so, as there is so much mistrust and anger regarding the recent events. There needs to be an honest, open dialogue where those aggrieved are given the opportunity to be heard without fear of reprisal, just as the police department needs to be given the opportunity to have investigations completed before a rush to judgment. While the majority of police officers are honest and hardworking, those who fail to uphold their oath should be punished.

Police officers are sworn to protect and serve; they run toward trouble when we run away from it. They patrol neighborhoods that are dangerous, riddled with crime, where we are taught to avoid them. They put their lives on the line every day, knowing they might never return to their families. Yes, this has been a very tough week. Let’s hope that future discussions help bridge the gap between our police and the citizens they are sworn to protect.

Catherine M. Stanton is a senior partner in the law firm of Pasternack Tilker Ziegler Walsh Stanton & Romano, LLP. She focuses on the area of Workers’ Compensation, having helped thousands of injured workers navigate a highly complex system and obtain all the benefits to which they were entitled. Ms. Stanton has been honored as a New York Super Lawyer, is the past president of the New York Workers’ Compensation Bar Association, the immediate past president of the Workers’ Injury Law and Advocacy  Group, and is an officer in several organizations dedicated to injured workers and their families. She can be reached at 800.692.3717.