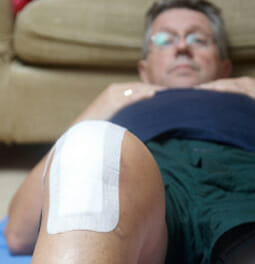 Knee implants you thought would last decades may only last 3 years.

Although we have noticed an increase in the number of joint replacement procedures undergone by our clients over the past several years, very few have ended with a bad result.

If you feel that you or someone you know may have a defective knee implant, contact our office to discuss your case and receive a referral to an attorney that handles this type of claim.

Zimmer is an international medical device manufacturer based in northern Indiana. It was founded in 1927, and focuses on the manufacture of products for orthopaedic surgeries. Zimmer’s sales in 2009 were $1.76 billion, and it is estimated that the NexGen family of knee implants make up about 2% of the overall sales of Zimmer.

Flex implants are not lasting nearly as long as intended.

The Zimmer NexGen Knee Implant is not a specific device, but rather a family of devices. Within this NexGen device family, there are different models of implants: NexGen CR-Flex, NexGen LPS-Flex, NexGen High Flex, NexGen LPS, NexGen MIS.

Unlike most knee implants, the Zimmer NexGen CR-Flex is attached without the use of cement, which may cause the system to loosen or detach completely.

The Zimmer NexGen CR-Flex implant was designed to give patients better range of motion than the customary NexGen device. Scientific studies have been accumulating for years with regard to concerns over the safety of the NexGen CR-Flex. Interestingly, the U.S.Food and Drug Administration did not make it a requirement for Zimmer to test the NexGen CR-Flex artificial knee implant system in patients prior to putting it on the market.

Knee replacements are intended to last approximately 15 years, but studies have shown the Zimmer NexGen CR-Flex can fail within 3 years of the initial knee implant surgery.

Recently, Dr. Berger, who worked on designing surgical tools and artificial joints for Zimmer, published the following results from a study demonstrating that the Zimmer NexGen CR-Flex implants are not lasting nearly as long as intended:

It is believed that high failure rates of the high-flex models of Zimmer knee implants may be due to a defective design, but Zimmer has placed the blame on surgeons.

Unlike most artificial knee implants, the Zimmer NexGen CR-Flex is attached to the thigh bone without the use of cement. Regrettably, this may cause the knee replacement system to loosen over time or detach completely. A loose knee implant can cause pain, erode the bone, and severely restrict the patient’s daily activities.

Signs of a loose Zimmer knee implant may include the following:

Knee replacements are intended to last approximately 15 years, but studies have shown the Zimmer NexGen CR-Flex can fail within three years of the initial knee implant surgery. Because the Zimmer NexGen CR-Flex knee replacements are linked to high failure rates, some doctors have requested a recall. So far, however, these Zimmer knee implants have not been recalled. It is believed that high failure rates of the high-flex models of Zimmer knee implants may be due to a defective design, but Zimmer has placed the blame on surgeons.