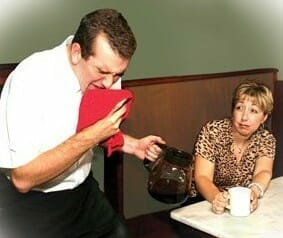 Many workers no longer have paid sick days.

Health Care Is Just The Beginning

At a time when a flu epidemic is exploding out of control, killing thousands of people, forty-two million Americans have no sick leave. Many of these people are lower paid, often work part time, and continue to work when ill because they can’t stay home to recover without losing their income. I am shocked and dismayed that many hard-working folk are forced to work when sick because staying home is not economically possible. Making matters even worse, these highly vulnerable workers often have no employer-provided health insurance so even serious illnesses go untreated, putting us all at a higher risk for infection from a contagious worker, like a server in a restaurant, for whom taking an unpaid day off is impossible.

…the trend toward low pay, long hours and few benefits is getting stronger.

I fear that if the current trends continue, the lives of the millions of Americans who struggle at low-paying jobs will remain miserable, desperate and be lacking in real hope. It appears that the trend toward low pay, long hours and few benefits is getting stronger. At the turn of the 20th century when Upton Sinclair wrote “The Jungle,” describing immigrants struggling in Chicago, the jobs were more physical, dangerous and just plain disgusting. However, millions of “New Jungle” workers still struggle and suffer today.

After over 100 years of progress, the American middle and lower classes are under constant attack. The efforts to limit rights of workers are ongoing and supported by big business. Every day I read of measures being introduced in state legislatures to limit access to and decrease the benefits of workers’ compensation. The right to collective bargaining is being attacked as well. Local elections are overrun by anonymous innocent-sounding Super PACs funded by 21st Century versions of robber-barons who are using their wealth and power to squeeze out a few more dollars in profits to add to the tens of billions of dollars already sitting in their bank accounts. These are not job creators, they are their own personal wealth creators. Income equality is at an all-time low in the United States, and the trends are getting worse.

How can this be happening in 21st century America? How can we call ourselves civilized? Can we really allow such maltreatment of workers and disregard public health in what we call an “advanced,” “modern,” and frequently, an “exceptional” county?

We are not without hope, though. Crusaders like Senator Elizabeth Warren are working hard to reverse the trends and preserve the American Dream for future generations. But our protectors are few. We cannot assume that someone else is looking out for us. We must engage with government at the local, state and federal levels so that the voices of regular working folk are not drowned out by a cabal of rogue billionaires trying to keep score by increasing their own personal fortunes at the expense of working people. I fear that if we sit by passively, our children will all be working in the New Jungle, America will have lost its middle class, and with it, the American Dream will be a distant memory. The time to act is now.