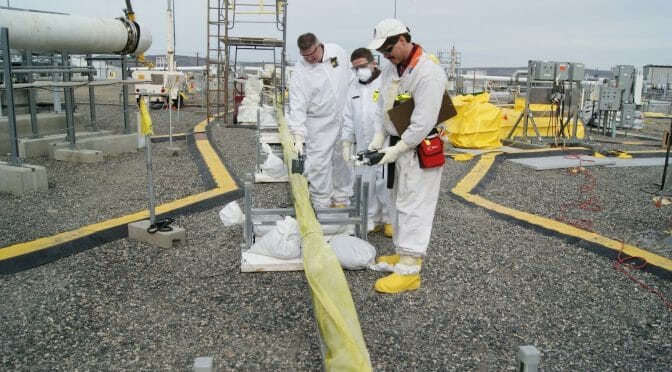 As of March 27, 2014, nearly 20 workers had reported symptoms related to chemical vapor exposure in Hanford’s tank farms in the prior two weeks. Hanford Challenge, a watchdog group overseeing Hanford’s impact on workers, citizens and the environment, reported on the vapor exposures.

Hanford Challenge provides unique services for Hanford workers who are ill or injured and employees who have raised concerns and are suffering reprisals.  They also conduct environmental sampling to monitor for radioactive and chemical contamination and work with Tri-Party agencies to address their findings and occasionally works to influence legislation that affects the site, including lobbying and attending hearings.

“Hanford has a duty to protect the workers at the site. They are doing an important cleanup and yet their lives and health are being sacrificed for expediency.  WRPS calls these vapors ‘smells’ in their press statement – discounting the serious harms that could result from exposure.”

Hanford Challenge has been a staunch advocate of protecting workers from chemical vapor exposure through supplied air, increased monitoring of the full spectrum of the 2,400 toxic chemicals that have been found in Hanford’s tanks, and policies that acknowledge the uncertainty and inaccuracy of vapor monitoring, as opposed to the position frequently taken by the contractor and DOE that “we couldn’t detect elevated levels of chemicals following the exposure, so nothing happened”.

In 2004 Hanford Challenge won the battle for workers over Hanford’s cavalier attitude towards the chemical harms inherent in these vapors, after NIOSH, the DOE and the State of Washington all filed reports agreeing with our investigative findings.  However, it took another five years to get the contractors to make substantial improvements in the program to protect workers from these vapors.  Because of contractor turnover and shifts in management, there appears to be significant backsliding on protections for workers from chemical vapor exposure.

Hanford Challenge is extremely concerned about the workers who have been exposed and what measures DOE and the contractors will take to support these workers and protect others at the site.  Symptoms of exposure include nausea, metallic taste in the mouth, dizziness, headache, flushed skin, accelerated heart rate, among others.  Past exposures have led to toxic encephalopathy, neurological damage, and long-term chemical sensitivity.

Many of the dangerous chemicals in Hanford’s tanks are hard to detect.  Routine tank vapor monitoring only looks for ammonia and total organic carbons, not the full suite of chemicals.  Monitoring post-exposure is often performed hours after the incident, producing unreliable readings that rarely monitor for more than ammonia and total organic carbons.  Many of the dangerous chemicals need to be analyzed within hours of the sample being taken.  In the past these samples have sat for months on a shelf before being analyzed, at which point the results are no longer relevant.  Hanford Challenge calls on the contractor and the Department of Energy to support workers who have experienced symptoms of exposures, to step up monitoring of chemical vapors, and to take protective measures for all workers entering the tank farms.

Watch the King5 News coverage of this developing story, here.