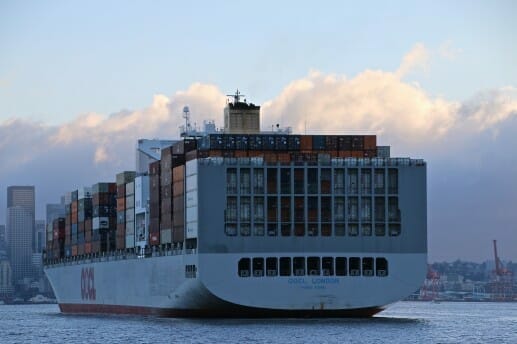 Those in the Puget Sound region cannot help but notice the presence of many more cargo ships than usual at anchor in our harbors.  On my commute home from downtown Seattle I pass by Elliott Bay, where giant cargo ships fill every corner.  I can look across to Manchester, across the Sound from West Seattle, and am surprised to see cargo ships at anchor behind Blake Island State Park.

It’s a visible effect of an alleged “slowdown” that comes six months into West Coast contract talks between the ILWU, which says it’s “congestion,” and the terminal operators of the Pacific Maritime Association, which accuses the ILWU of “orchestrated job actions.”

On November 21st, the Ports of Tacoma and Seattle sent a joint letter to President Obama seeking the assistance of a mediator to resolve the contract disputes, and published the following press release:

CEOs from the ports of Seattle and Tacoma sent a letter today urging President Barack Obama to assign federal mediators to resolve contract negotiations between the Pacific Maritime Association and the International Longshore and Warehouse Union.   The two ports together form the third-largest container gateway in North America, representing a critical connection to Asia and Alaska.  (Read the full letter to President Obama.)

Six months without a contract signed.  Perhaps the Ports are right to ask for assistance through a mediator.  The comment stream on the WSB site is evidence that local public opinion varies wildly and feelings run deeply on this topic.