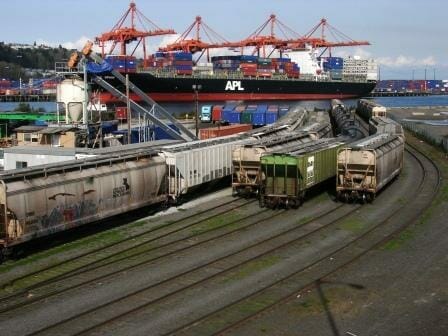 Inadequate emergency response plan for fuel spills one of many concerns

A marine terminal operator in Seattle is facing more than $400,000 in fines from the Department of Labor & Industries (L&I) in connection with multiple serious safety and health violations at its facility on Harbor Island.

L&I recently cited Seattle Bulk Shipping for more than 50 workplace safety and health violations. The state began investigating the company after a worker was hospitalized with injuries when he fell into an underground grain storage pit in December 2014.

Seattle Bulk Shipping performs several operations at its facility including transferring large quantities of ethanol fuel from rail cars to tanker trucks, loading grain on rail cars and transferring it between trucks, and trailer and forklift repair.

L&I inspectors found several noticeable serious hazards during an initial visit to the location which prompted a comprehensive safety and health inspections of the entire worksite.

During the inspection, L&I placed an immediate restraint order on the company’s ethanol transfer operation because of inadequate emergency response planning. The department was concerned about the possibility of a catastrophic release of the highly flammable fuel, and the potential impact on workers and the traveling public on the West Seattle Bridge above the facility.

L&I worked with the Seattle Fire Marshal’s office and the employer to ensure that the most serious gaps in emergency response training were addressed before the hazardous material transfer operations were allowed to resume.

During several visits to the site, L&I safety and health compliance officers found that employees were routinely exposed to multiple hazards that could cause death or serious injuries or illnesses. The employer had been cited on multiple prior occasions for many of the same violations or issues.

In total, the company was cited for five “willful” and 33 “serious” violations, as well as two “failure to abate” for failing to correct previous violations, and 19 general violations. A violation is considered willful when an employer knowingly violates a rule or is plainly indifferent to employee safety and health, while a serious violation is one where there is a substantial probability of serious injury or death.

The $424,850 fine is among the largest L&I penalties of a business in recent years.

The violations and penalties include:

Among the 33 serious violations the employer was cited for were multiple “confined space” violations. Working around or inside a “confined space,” such as grain pits, without safety precautions can be deadly to workers and would-be rescuers.

As a result of these violations, Seattle Bulk Shipping Inc., has been identified as a severe violator and will be subject to follow up inspections to determine if the conditions still exist in the future.

The company has appealed the safety violations and has until Aug. 6 to appeal the health violations. Penalty money paid in connection with a citation is placed in the workers’ compensation supplemental pension fund, helping workers and families of those who have died on the job.