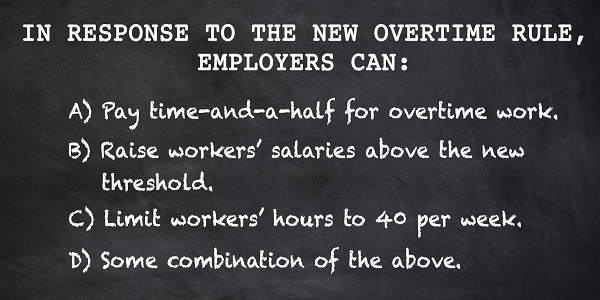 In 2014, President Obama directed the Secretary of Labor to update the overtime regulations to reflect the original intent of the Fair Labor Standards Act, and to simplify and modernize the rules so they’re easier for workers and businesses to understand and apply. The department has issued a final rule that will put more money in the pockets of middle class workers – or give them more free time.

The final rule will:

Overtime updates will extend protections to 4.2 million workers across the country. The final rule will become effective on December 1, 2016, giving employers more than six months to prepare. The final rule does not make any changes to the duties test for executive, administrative and professional employees.

Workers’ compensation benefits paid to an injured worker while they are unable to return to work after an injury are paid based on a percentage of the wages earned prior to the injury.  In Washington State, overtime hours are included in the benefit rate calculation but only at the base hourly wage.  This only applies to hours that are paid as overtime – unpaid hours are not counted.  When this new overtime rule takes effect, an estimated 76,000 people in Washington State will be eligible to receive overtime pay.  If any of these workers are injured on the job, their compensation rate will include the overtime hours they worked prior to the injury.