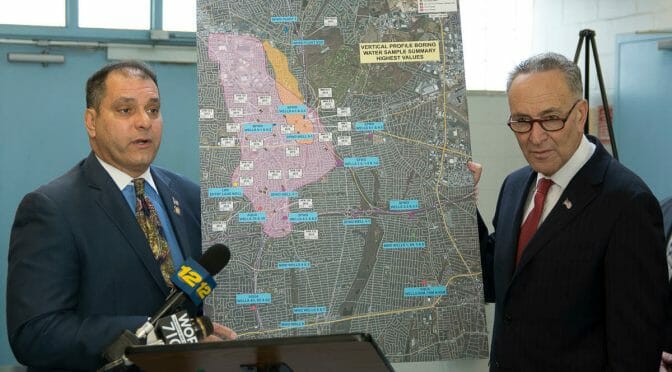 N.Y. Assemblyman Anthony Saladino (left) and U.S. Sen. Charles Schumer (D-NY) display a map of the spread of a plume of toxic chemicals from Bethpage to Massapequa.

Last year news broke that New York was going to test water on Long Island for contamination from toxic groundwater near the old Grumman site in Bethpage, which previously housed the U.S. Navy. Decades ago it was determined that the site was toxic and the Navy and Grumman had spent millions of dollars to clean it up, but despite this, fears remained that there was some contamination that may have seeped from the site into the groundwater.

Governor Cuomo subsequently announced that the Department of Environmental Conservation (DEC) was going to seek financial compensation for damages to groundwater resources related to that contamination. As a transplanted Queens’s native who now lives in Bethpage, the news was troubling to say the least, but it is just one of many examples of a contaminated water supply. The City of Flint, Michigan, made headlines during the last couple of years after dangerous levels of lead were found in the water. The resulting cover-up resulted in a number of lawsuits and criminal indictments.

If these types of examples are startling, then this one will really get to you. We are in the midst of a heartbreaking contamination event involving our service men and women and their families at Camp Lejeune, North Carolina. From the 1950s through the 1980s, people living or working at the U.S. Marine Corps base there were potentially exposed to drinking water contaminated with industrial solvents, benzene, and other chemicals. It is estimated that almost one million people were exposed to contaminated water during this time.

The Veterans Administration (VA) has established a presumptive service connection for veterans, reservists, and National Guard members exposed to contaminants in the water supply at Camp Lejeune from August 1, 1953 through December 31, 1987, who later developed one of the following eight diseases:  adult leukemia, aplastic anemia and other myelodysplastic syndromes, bladder cancer, kidney cancer, liver cancer, multiple myeloma, Non-Hodgkin’s lymphoma, or Parkinson’s disease. These conditions are the only ones for which there is sufficient scientific and medical evidence to support the creation of presumptions. However, the VA will continue to review relevant information as it becomes available.  The presumptive service connection means that all Lejeune veterans with one of the eight conditions listed above will not have to provide documentation proving their conditions were caused by the tainted water.

President Barack Obama approved a $2.2 billion compensation program to pay disability compensation benefits. Disability Compensation is a tax free monetary benefit paid to veterans with disabilities that are the result of a disease or injury incurred or aggravated during active military service. Compensation also may be paid for post-service disabilities that are considered related or secondary to disabilities occurring in service, and for disabilities presumed to be related to circumstances of military service, even though they may arise after service. As many of these conditions develop over time, the veteran may no longer be on active duty. This will not disqualify a claim for compensation. If you or a family member were at Camp Lejeune, it is imperative that you know your rights. They are complicated and often misunderstood, thereby leading our veterans to miss out on benefits they are more than entitled to and definitely deserve. We are awed by our veterans’ commitment to this country and we thank them for their service.