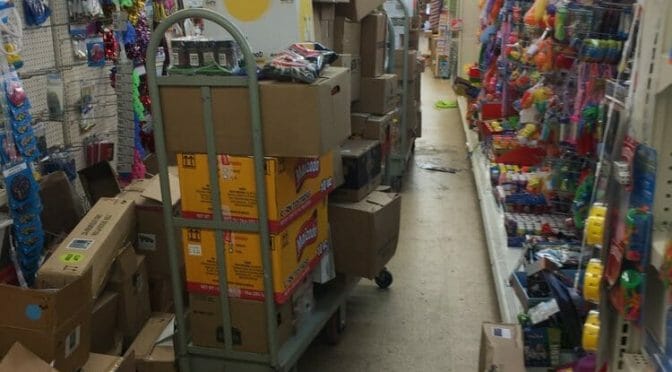 For the second time in less than two years, Dollar Tree Stores Inc., faces stiff fines for workplace safety violations at two of its stores. The company faces $306,000 in state penalties.

The Department of Labor & Industries (L&I) cited and fined the Virginia-based employer after inspections at the company’s Bonney Lake and Kelso stores found “willful” violations, the most severe. The L&I inspector found the stores were knowingly exposing employees to workplace safety hazards. Dollar Tree stores in Aberdeen and Chehalis were cited for the same violations in 2016.

“We are seeing the same safety violations at Dollar Tree stores over and over again in Washington,” said L&I Division of Occupational Safety and Health Assistant Director Anne Soiza. “It’s concerning because this is a national problem as well. Employees, and sometimes customers, are being put at risk even though the fixes to these safety problems are simple.”

L&I initiated the recent inspections after getting complaints about safety hazards at the two stores. A customer at the Bonney Lake store contacted L&I to express concerns for the store employees’ safety because boxes crowded and blocked pathways and emergency exit routes. Many boxes were also stacked precariously and so high that they could easily have fallen on employees or even customers in some instances. All of the willful violations are serious, but the blocked pathways and emergency exits are the most concerning.

At the Bonney Lake store, the company was cited for three willful safety violations. The first was for not ensuring that exit routes were free of obstructions. At the time of the inspection, merchandise blocked several aisles and passageways. Employees did not have clear paths from the breakroom and other areas to emergency exits and could be trapped in a fire or other emergency. Because of the employer’s history, this violation carries the maximum fine of $70,000.

The second willful violation cited was for storing merchandise in a way that created a safety hazard. The stockroom was packed with boxes of merchandise in stacks and piles. Heavy boxes were on top of light ones, some had fallen from the stacks, and there were uneven and leaning stacks more than nine feet high. This violation also carries the maximum penalty of $70,000.

Improperly stored merchandise can fall on employees causing serious injuries or even death if the boxes cause an employee to fall and strike their head on the floor. Lifting heavy boxes onto nine-foot stacks is also likely to cause strains and sprains or serious back injuries.

A third willful violation with a penalty of $26,000 was cited for not installing protective guarding or covers over light fixtures that could be struck and broken by the stacked merchandise, which could cause eye injuries or cuts from falling glass.

At the Kelso store, the company was cited for two willful violations with maximum penalties of $70,000 each. The violations were similar to those cited at the Bonney Lake store and previously at the Aberdeen and Chehalis stores. Merchandise was crowded into a storeroom with uneven stacks as high as eight feet, and exit routes were blocked or obstructed with boxes of merchandise.

Dollar Tree has appealed the citation.