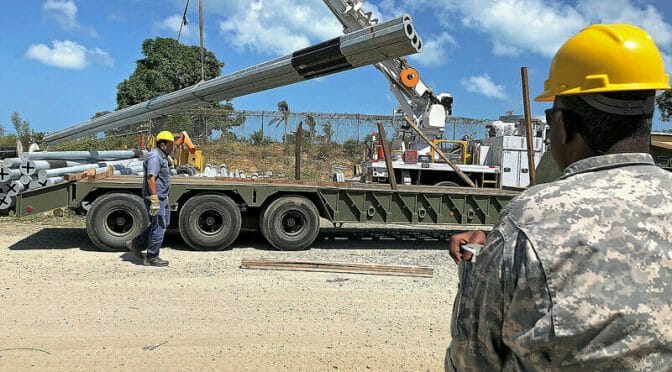 NOTICE TO EMPLOYERS, INSURANCE CARRIERS, SELF-INSURED EMPLOYERS UNDER THE LONGSHORE AND HARBOR WORKERS’ COMPENSATION ACT, AND OTHER INTERESTED PERSONS

In the aftermath of the devastation caused by Hurricanes Irma and Maria in Puerto Rico in September of 2017, various agencies of the United States have utilized the services of private contractors to provide humanitarian and other assistance as part of the global relief effort there. The Defense Base Act (DBA) requires private contractors performing work under a U.S. government contract to purchase DBA insurance to cover their employees working in Puerto Rico.

The DBA, an extension of the Longshore and Harbor Workers’ Compensation Act, applies to injuries incurred by workers in Puerto Rico working under a contract with the U.S. government, see Section 1, 42 U.S.C. § 1651(a)(1-6).

Federal agency contracting personnel should include contract provisions requiring private contractors to secure DBA insurance from a carrier authorized by the U.S. Department of Labor.  Because the DBA applies to all employees of government contractors, DBA insurance must be in place before workers are deployed to Puerto Rico or work is performed in Puerto Rico.  The DBA applies to U.S. workers, local workers, and foreign national workers.

When DBA insurance is properly secured, the DBA provides the exclusive remedy for these workers who sustain an injury, an illness, or are killed. The DBA is administered by the United States Department of Labor, Office of Workers’ Compensation Programs (OWCP), Division of Longshore and Harbor Workers’ Compensation (DLHWC).  OWCP/DLHWC authorizes insurance carriers to write DBA policies and employers to self-insure for DBA. See a list of those insurance carriers which are currently authorized to write DBA coverage.

If an employee covered by the DBA sustains a work-related injury, it must be reported to OWCP/DLHWC.  The DBA carrier should also be contacted immediately.  An employee may submit a claim for injuries arising from employment under a U.S. government contract in Puerto Rico to OWCP/DLHWC.  The case will then be assigned based on where the claimant resides.

For more information Visit the USDOL Defenst Base Act  and Division of Longshore and Harbor Workers’ Compensation Defense Base Act pages.

Photo by The National Guard on Foter.com / CC BY