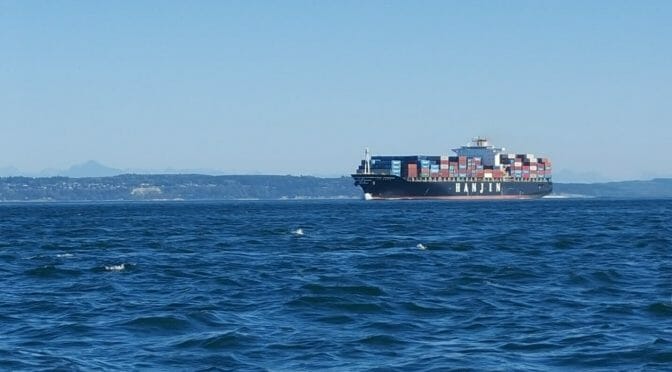 I recently had the opportunity to tour Seattle’s Terminal 18 and BNSF’s intermodal rail yard as part of the Port 101 educational series offered by the Port of Seattle.  The Cargo 101 class is provided in partnership with: SSA Terminals, BNSF Railway Company, International Longshore and Warehouse Union, and Puget Sound Pilots.  During the 2-hour bus tour of the facilities, speakers representative of their fields described their roles in the movement of cargo from ship to truck to train.

The Ports of Seattle and Tacoma have joined forces to form The Northwest Seaport Alliance. Together, the ports form the third-largest container gateway in North America, provide significant revenue for the state, and support (directly or indirectly) nearly 50,000 jobs.  These jobs include those in surface transportation (with trucking companies and railroads), warehouse work, longshore and dock work, and Port administration jobs.

Our first stop was Terminal 18, located southwest of Downtown Seattle, on the east side of Harbor Island.  The largest container facility in the Pacific Northwest, Terminal 18 covers 196 acres and includes four vessel berths totaling 4,460 feet in length.  It is operated by SSA Marine. Top trading partners include China/Hong Kong, Japan, Republic of Korea, Canada, and Australia. The top imports (by dollar value) are industrial machinery and computers, electronics, and vehicles and parts.  Our Ports’ top exports (by dollar value) include oil seeds and grains; industrial machinery and computers; prepared vegetables, fruits and nuts; meat and meat products; and seafood.

One player in the supply chain is the marine pilot. During the tour, we heard from one of the 54 current members of Puget Sound Pilots.  The pilots are highly skilled, specialized ship captains, thoroughly familiar with local waters, who help guide commercial vessels safely in and out of harbors, while protecting the local marine environment.  When the pilot boards the ship, he or she becomes (as our speaker described) “the ultimate backseat driver,” directing the ship’s captain and crew through our local waters.  Becoming a Puget Sound Pilot requires at least two to four years of captain experience, followed by passage of a written examination, and evaluation by pilots and other experts in order to be invited into the training program.  The program lasts between one and three years.  In addition, a pilot must earn a federal pilotage endorsement – which requires many months of local bridge experience and the ability to replicate local waterways navigational charts from memory.

From Terminal 18, we headed to BNSF Railway’s SIG (Seattle International Gateway) intermodal facility.  Here, cargo containers are loaded onto railcars for delivery throughout the country.  Containers are loaded and unloaded using fully-electric wide-span cranes.  BNSF was the first North American railway to utilize these zero-emission cranes, and SIG was the cranes’ testing site. Installed as part of the yard’s expansion in 2008, the cranes nearly doubled the yard’s capacity for cargo, making it an important part of the Port’s operations.

The last player in the supply chain we heard from was a member of the Longshore Division of the International Longshore and Warehouse Workers Union’s Local 19.  Put simply, a longshoreman loads and unloads ships’ cargo.  Of course, the job is not simple, nor is building sufficient experience to make a living doing it.  The work is highly skilled and can involve intense physical labor, heavy equipment operation, and working from heights.  Beginners need to be prepared to go long stretches without available work, and almost certainly work another job until they can move up the union ranks.  During our speaker’s first year, he worked one longshore shift. The Union’s website has a wealth of information on the history of the industry and the challenges these workers face (ILWU).

Photo credit: Kristen Wolf (I actually took it on our sailing trip, much better than anything I could get through a bus window).