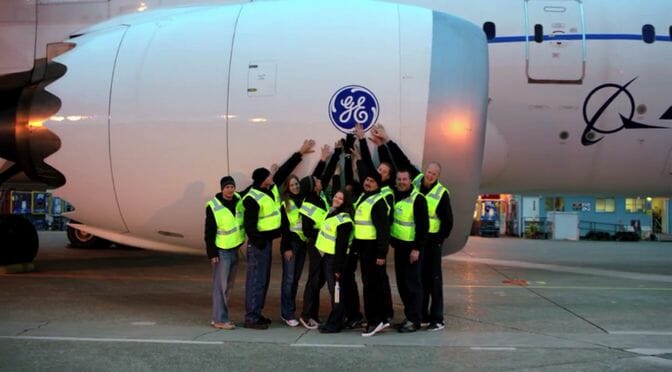 General Electric is running a series of advertisements that portray their employees, working in several industries, celebrating the impact of their work on our communities as well as on individuals.

In one spot, workers who build jet engines explain the precision of their work and are shown watching a plane take off using a set of engines they built, with smiles on every face.

In another, workers in a plant that builds medical scanning machines are visited by a bus load of cancer survivors whose treatment included scans by the devices. In a third spot, workers who build engine turbines are toasted at their local watering hole because, without them, there wouldn’t be cold beer (Bud, specifically).

General Electric has launched a website which encourages individuals to participate in its “Celebrate and Power What Works” campaign. Visitors are able to upload photos and vote on their favorites, hooking into Facebook and entering to win prizes. For every action taken on the site – – upload or like a photo, or like GE on Facebook – – GE will donate $1 towards a non-profit group supporting workers, with a new non-profit recipient each week, giving up to $10,000 to each group. Past groups that benefited from this campaign include: Veterans Green Jobs, College for Every Student, Hire Heroes USA, and the Network for Teaching Entrepreneurship. In order to participate, you have to log in using your Facebook or Twitter account, so I skipped this step.

The message: real workers make an impact on all of our lives every day.

The company’s primary message, of course, is that General Electric has an impact on our lives every day, that GE is a leader in technology on multiple fronts. But, every time I see the ads, I am more focused on the pride on the workers’ faces and the message that the work they do matters. Everyone wants their work to matter but, in many cases, blue-collar workers are portrayed in an unflattering manner.
If our manufacturing economy is to prosper, we need to respect and appreciate the workers in that sector. Young people need to be shown that skilled labor is a valued and important facet of the workforce. GE has accomplished this in their latest ad campaign and created a way for individuals, in their own small way, to take action that matters, too.