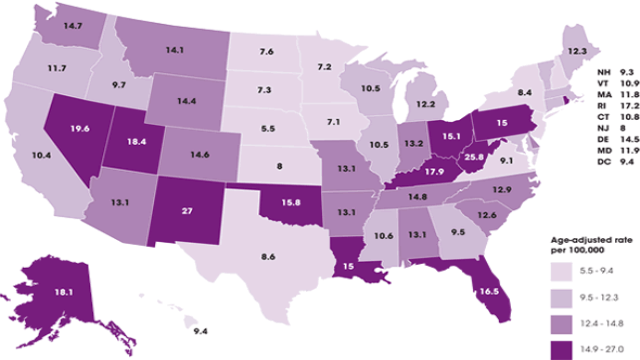 Many of my back-injured clients use pain relief medication in the opioid family: Hydrocodone (Vicodin), Oxycodone (Oxycontin or Percocet), Fentanyl (Duragesic or Fentora), Methadone, and Codeine.  Many variations of opioids exist, each with a different level of potency. The worker’s compensation industry has labeled excessive opioid use “an epidemic, particularly targeting worker’s compensation.” The Center for Disease Control has noted the problem of opioid abuse as a national danger.

The CDC latest statistics show close to 40,000 drug overdose deaths each year in the United States, more than half of which involve prescription drugs. Deaths in which opioids are used now exceed deaths involving heroin and cocaine combined. The drug overdose deaths are more numerous that motor vehicle crash deaths and the numbers have gone up every year since the turn of the century. One contributing factor is that many work-related injuries are back injuries, for which doctors increasingly prescribe opioids for both short and long term to address pain. CDC medical epidemiologist Dr. Leonard Paulozzi recently noted worker’s compensation medical providers may be exceeding guidelines from the American College of Occupational Environmental Medicine regarding the use of opioids and how long they should be used. Dr. Paulozzi noted 42% of workers with back injuries had opioid prescriptions in the first year after the injury, most of them after their first medical visit, but 16% of those workers were still receiving opioids a year after the injury. He noted while opioids might be good for use as acute medication, for example within six weeks after the injury, continuation of opioids is not indicated beyond that short term use.

Prescription medication has become a bigger portion of medical expense in all States, especially if the worker becomes dependent or addicted to the opioid medication to control pain.  Opioids are generally prescribed for several reasons in worker’s compensation claims, including catastrophic injury with chronic pain and injury involving surgical treatment necessitating pain control and general pain control.