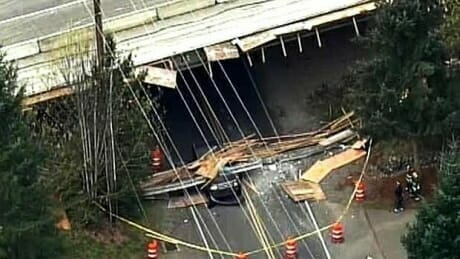 Part of the structure being demolished fell onto traffic below, killing Josh and Vanessa Ellis and their eight-month-old son, Hudson, when their vehicle passed under the overpass. See the KIRO-TV story about this tragic event here.

L&I has jurisdiction over worker safety, which is what the agency investigation focused on.

WHH Nisqually Federal Services, of Tacoma, was the general contractor for pedestrian improvements on the SR 410 overpass. WHH Nisqually contracted with HighMark Concrete Contractors of Buckley to do the concrete work. HighMark Concrete contracted with Staton Companies of Eugene, Ore., to remove a portion of the existing bridge. Staton hired Hamilton Construction of Springfield, Ore., to cut the concrete barrier. All four companies had workers on site.

“Demolition is one of the most hazardous operations in construction,” said Anne Soiza, assistant director for the L&I Division of Occupational Safety & Health. “Preparing and following a specific safety plan that anticipates the worst case conditions is critical. Unfortunately, that didn’t happen in this case.”

Staton was fined $58,800 for one “willful” and two “serious” violations for exposing workers to danger while demolishing the concrete barrier on the overpass. Staton oversaw the cutting of the concrete barrier by its subcontractor, but failed to provide a demolition plan to the subcontractor. The investigation found that Staton had concerns about the possibility of the barrier falling down during cutting, yet still continued with the work.

Hamilton Construction was fined $14,700 for three serious violations for exposing workers to essentially the same hazards as Staton Companies. However, none of the violations was found to be willful.

WHH Nisqually was fined $8,400 for two serious violations for not ensuring a workplace free from recognized hazards and for exposing workers on the lower level to the possibility of an unplanned collapse.

Highmark Concrete Contractors was fined $4,900 for one serious violation, also for not ensuring a workplace free from recognized hazards.

A willful violation can be issued when L&I has evidence of plain indifference, a substitution of judgment or an intentional disregard of a hazard or rule. A serious violation exists in a workplace if there is a substantial probability that worker death or serious physical harm could result from a hazardous condition.

The employers have 15 business days from receipt of the citation to appeal.