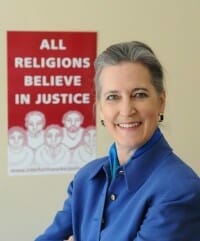 Mary Domer heads the local chapter of the Ladies of Charity and just chaired the national conference held in Milwaukee.  She recruited Kim Bobo, Director of Interfaith Workers Justice and author of Wage Theft in America to speak to the assembly. Kim’s presentation reminded us of the disparities of wealth in America and how that wage gap is increasing, in some measure because of wage theft.  Among the gems garnered from Kim’s presentation

Kim noted that many “tip” workers do not receive any of the tips, reminding us to either ask the question about whether the worker would receive a tip paid for by credit card or alternatively to simply pay in cash.  She noted an average of $2,600 lost average per year for low wage workers including janitors, drivers, landscapers, care workers.

Despite these negative trends, Kim suggested five ways in which we can all support low wage workers.

Through these methods and many more, we can all be men and Ladies of Charity.

The Claimant’s name has been changed to insure confidentiality.

Our clients who are embroiled in litigation in their seemingly straightforward workers’ comp cases are often shocked when we tell them how long it may likely take to get a final decision.  We recently prevailed in a case that serves as an exemplar of what the litigation process can involve.
David performed maintenance and repair for about five years on large construction equipment, requiring heavy lifting, carrying, torqueing, and other strength maneuvers in awkward positions, all affecting a shoulder condition that had its origins 30 years before in a diving injury followed by an injury on the job to the same shoulder that required surgery.  He had worked at vigorous labor for the ensuing 25 years with no limitations until his work for the last company aggravated his shoulder, disabling him from work and leading to a partial shoulder replacement surgery.
Here’s how the claim went:  David filed to reopen his 30-year old injury claim, but the Dept. of Labor & Industries (L&I) denied the reopening because of information about the recent work activity.  He then filed a claim based on injury from his last repair/maintenance work, and the claim was allowed as an “injury.”  The employer protested the allowance, and L&I took it back for further review.  It was then allowed as an “occupational condition or disease” based on the aggravating effect of the cumulative trauma on David’s pre-existing but non-disabling shoulder condition.  The employer then appealed that order to the Board of Industrial Insurance Appeals (BIIA) – our workers’ compensation “trial court” – and months later full hearings were conducted with live testimony from David and depositions of four medical witnesses.
Months after that, the BIIA judge who heard the evidence issued a decision fully favorable to David, and upholding the L&I allowance order.  The employer then requested reconsideration of the judge’s decision.  That was denied, and the employer then filed an appeal to superior court requesting a jury trial.  Many months later, the case was tried to a jury and the jury upheld the BIIA’s and L&I’s decisions.  At that point, the employer had been given five shots at overturning the allowance of David’s claim.

How long did all this take in a case with a seemingly straightforward medical issue?

An interesting side-note to this case:  Our Rule 9 intern, Brian Wright, recently graduated from Seattle University School of Law and preparing to take the bar examination later this month, assisted me in trying the case in superior court.  I turned over closing argument to the jury to Brian, and he did a great job, beating a seasoned defense lawyer I’ve been litigating against for 20 years or so.  At Causey Law Firm we’re wagering that Brian is the only Rule 9 intern in the state to prevail over an experienced lawyer in a superior court jury trial this year!

Causey Law Firm celebrated the New Year by welcoming Kim Krummeck aboard as of January 1, 2010.