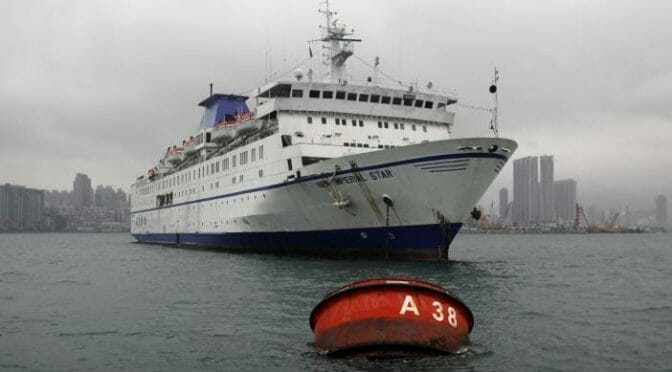 Unpaid, underfed, and thousands of miles from home on a rusting tanker, captain Munir Hasan says he is a victim of a shipowner who has slashed costs in the face of an eight-year shipping downturn.

Marooned on the medium-sized tanker Amba Bhakti that is moored close to Shanghai and is in urgent need of repair, Hasan claims he and his crew of four from India and Bangladesh have not received their wages from the owner, Varun Shipping, since February and are now owed tens of thousands of dollars.

Hasan said the crew has had to rely on handouts of basic food, such as rice and noodles, from V.Ships, a company that had operated the ship under contract for the owner before resigning in July.

“In the last 29 years of my sea career, I have never faced such a situation,” said Hasan, a 50-year-old sea captain from Bangladesh. Reuters couldn’t independently confirm certain aspects of Hasan’s account.

Varun has not responded to repeated queries from Reuters via email, and it declined to comment when reached by phone. When a Reuters reporter went to its offices in Mumbai, India on Aug. 18, company officials declined to comment on the matter, saying that management was busy.

Scott Moffitt, a V.Ships representative based in Singapore, told Reuters via email on Aug. 4 that it terminated three ship management contracts with Varun, including the one for the Amba Bhakti, “due to unpaid fees, including crew wages.”

Moffitt said that V.Ships “became increasingly worried about their (the crew’s) plight” and that “legal arrangements are under way to secure the back wages.”

The crew’s predicament underscores the desperate time faced by an increasing number of seafarers working on so-called “sweatships” around the world, as the shipping industry faces its worst downturn in 30 years.

Slack demand at a time when the size of the fleet of ships was increasing, drove dry cargo charter rates for products like coal and iron ore to historic lows earlier this year. It has led to the collapse of several shipping firms and has left many others fighting for survival.

The result is that crews and their support groups, such as the International Transport Workers Federation (ITF), are finding it difficult to force ship owners, many of whom cannot be easily located, to meet basic obligations. While “minimum working and living standards for all seafarers” were set in 2013 by the International Labour Organization, enforcing them isn’t easy.

Overall, shipping costs in the industry have come down by 20-30 percent from their peaks almost two years ago, shipping sources say. This has been achieved through savings in many areas, including fuel costs, reducing length of port stays, and cuts in provisions, crew travel costs and spending on equipment.

But the overcapacity in the industry is so great that it isn’t enough. Charter rates for tankers or container ships often don’t cover operating expenses, and both shippers and the analysts who follow them largely agree there won’t be any real improvement until 2018-2020.

For example, the average payment for a capesize bulk carrier capable of carrying 170,000 tonnes of iron ore or coal has been $5,393 per day so far this year, according to data from shipping services firm Clarkson. And yet, accountancy firm Moore Stephens pegs daily operating costs for a similar capesize ship at around $7,300 per day.

Not all shippers have cut crew provisions drastically, though a number say they have been reducing costs.

“There are many ways of cutting costs. Bottled water is an example. Is it really necessary to have bottled water if you have potable water available on-board?” he asked.

The number of ships being seized and held by the authorities because they are unsafe is rising. For example, there were 202 ships detained last year by the U.S. Coast Guard (USCG) for environmental or safety deficiencies, up from 143 in 2014, the USCG said in its 2015 annual report.

Rear Admiral Paul Thomas, assistant commandant for Prevention Policy at USCG, told Reuters that because of the low shipping rates and overcapacity, “vessel maintenance can take a back seat in order to minimize operating costs.”

Shipping executives contacted in Singapore and Hong Kong also said some shippers were cutting back on food and drink costs. They said crews had faced a shift from steak to cans of spam meat, and from fresh to canned fruit, among other cost reductions.

Jason Lam, inspector for the ITF in Hong Kong, says in the first seven months of the year he dealt with 115 ship safety cases, a faster pace than the 161 cases recorded in all of 2015 and 126 in the whole of 2014, usually involving unpaid crew wages or poor working conditions. He said it was clear that some shipping companies are “refusing to supply their ships” because of the weak shipping markets.

In one case, the New Imperial Star – a large passenger ship that was used for gambling cruises in the South China Sea – failed Hong Kong safety inspections and has been detained in port since November, according to Hong Kong Marine Department records.

The ship was sold to a buyer in an auction by the Hong Kong authorities on Tuesday and the proceeds will be partly used to pay outstanding wages. The identity of the new owner couldn’t immediately be ascertained.

The telephone number of the ship’s previous owner, Hong Kong registered Skywill Management Limited, was not operable this week, and the company has differing addresses listed in Hong Kong company directories.

In another case, the Five Stars Fujian, a coal carrier, has been sitting near the Great Barrier Reef, off Australia’s east coast, for a month with supplies diminishing and salaries going unpaid.

The ITF in Australia said that there were 21 Chinese men onboard as of August 14, and that the crew hadn’t received wages since June and were now “very low on provisions.”

The Hong Kong Shipowners Association (HKSOA) said last week that it was “extremely concerned about the seafarers on the vessel, and that its crew had “effectively been abandoned by the owner.”

There were no signs of the firm at Five Stars Fujian Shipping’s registered address in Hong Kong.

Back at the Amba Bhakti, the crew have turned to outside groups for help.

Reuters has viewed an email that Hasan sent on Aug. 2 to the Mission To Seafarers, an international crew support group, and the ITF, in which he said that they had been “held up on board … without wages for six months,” adding: “We are requesting your immediate help to save our families.”

In response, the ITF has been pressing the owners and organizing support for the crew.

The sailors have been employed on various contracts lasting from two to nine months to meet international rules governing minimum crew levels even though the ship has been languishing near Shanghai for three years. The main and auxiliary engines that would power generators and deck equipment need to be repaired.

Two crew members had already given up and gone home, including the ship’s chief engineer, Mohammed Abdul Mazid, according to Hasan. Reuters was unable to reach Mazid for comment.

Hasan said Mazid left the ship in tears to return to Bangladesh in July despite being owed $73,000 in back pay.